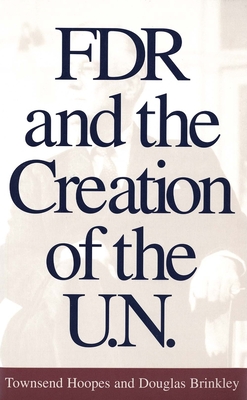 FDR and the Creation of the U.N.

In recent years the United Nations has become more active in—and more generally respected for—its peacekeeping efforts than at any other period in its fifty-year history. During the same period, the United States has been engaged in a debate about the place of the U.N. in the conduct of its foreign policy. This book, the first account of the American role in creating the United Nations, tells an engrossing story and also provides a useful historical perspective on the controversy.

Prize-winning historians Townsend Hoopes and Douglas Brinkley explain how the idea of the United Nations was conceived, debated, and revised, first within the U.S. government and then by negotiation with its major allies in World War II. The experience of the war generated increasing support for the new organization throughout American society, and the U.N. Charter was finally endorsed by the community of nations in 1945. The story largely belongs to President Franklin Roosevelt, who was determined to form an organization that would break the vicious cycle of ever more destructive wars (in contrast to the failed League of Nations), and who therefore assigned collective responsibility for keeping the peace to the five leading U.N. powers—the major wartime Allies. Hoopes and Brinkley focus on Roosevelt but also present vivid portraits of others who played significant roles in bringing the U.N. into being: these include Cordell Hull, Sumner Welles, Dean Acheson, Harry Hopkins, Wendell Willkie, Edward Stettinius, Arthur Vandenberg, Thomas Dewey, William Fulbright, and Walter Lippmann. In an epilogue, the authors discuss the checkered history of the United Nations and consider its future prospects.