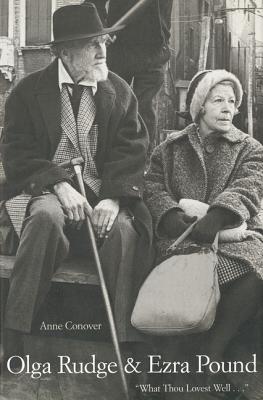 A loving and admiring companion for half a century to literary titan Ezra Pound, concert violinist Olga Rudge was the muse who inspired the poet to complete his epic poem, "The Cantos," " "and the mother of his only daughter, Mary. Strong-minded and defiant of conventions, Rudge knew the best and worst of times with Pound. With him, she coped with the wrenching dislocations brought about by two catastrophic world wars and experienced modernism's radical transformation of the arts.
In this enlightening biography, Anne Conover offers a full portrait of Olga Rudge (1895 1996), drawing for the first time on Rudge's extensive unpublished personal notebooks and correspondence. Conover explores Rudge's relationship with Pound, her influence on his life and career, and her perspective on many details of his controversial life, as well as her own musical career as a violinist and musicologist and a key figure in the revival of Vivaldi's music in the 1930s. In addition to mining documentary sources, the author interviewed Rudge and family members and friends. The result is a vivid account of a highly intelligent and talented woman and the controversial poet whose flame she tended to the end of her long life.
The book quotes extensively from the Rudge Pound letters--an almost daily correspondence that began in the 1920s and continued until Pound's death in 1972. These letters shed light on many aspects of Pound's disturbing personality; the complicated and delicate balance he maintained between the two most significant women in his life, Olga and his wife Dorothy, for fifty years; the birth of Olga and Ezra's daughter Mary de Rachewiltz; Pound's alleged anti-Semitism and Fascist sympathies; his wartime broadcasts over Rome radio and indictment for treason; and his twelve-year incarceration in St. Elizabeth's Hospital for the mentally ill.