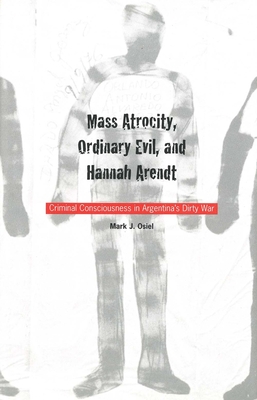 Is it possible that the soldiers of mass atrocities—Adolph Eichmann in Nazi Germany and Alfredo Astiz in Argentina’s Dirty War, for example—act under conditions that prevent them from recognizing their crimes? In the aftermath of catastrophic, state-sponsored mass murder, how are criminal courts to respond to those who either gave or carried out the military orders that seem unequivocally criminal?

This important book addresses Hannah Arendt’s controversial argument that perpetrators of mass crimes are completely unaware of their wrongdoing, and therefore existing criminal laws do not adequately address these defendants. Mark Osiel applies Arendt’s ideas about the kind of people who implement bureaucratized large-scale atrocities to Argentina’s Dirty War of the 1970s, and he also delves into the social conditions that could elicit such reprehensible conduct. He focuses on Argentine navy captain Astiz, who led one of the most notorious abduction squads, to discover how he and other junior officers could justify the murders of more than ten thousand suspected “subversives.”

Osiel concludes that legal stipulations labeling certain deeds as manifestly illegal are indefensible. He calls for a significant change in the laws of war to preserve both justice and the possibility of dialogue between factions in such sharply divided societies as Argentina. Osiel’s proposals have profound implications for future prosecutions of Pinochet’s lieutenants, Milosevic’s henchmen, the willing executioners of Rwanda and East Timor, and other perpetrators of state-endorsed murder and torture.

Mark J. Osiel is professor of law at the University of Iowa. He is the author of Mass Atrocity, Collective Memory and the Law and Obeying Orders: Atrocity, Military Discipline, and the Law of War.
Loading...
or support indie stores by buying on