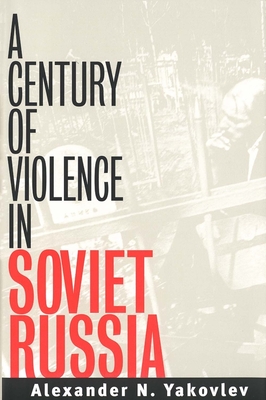 A Century of Violence in Soviet Russia

Alexander N. Yakovlev played a unique role in the transformation of the Soviet Union that led to its collapse in 1991. It was he who developed the concept of perestroika and persuaded Gorbachev to pursue it, despite the cataclysmic though deeply desired changes he knew would ensue. Since the disappearance of the Soviet Union, Yakovlev has devoted himself to understanding its tragic history. This book is the outcome of ten years of research and a lifetime of reflection on the evils of the system of which he was a part and which shaped the country he loves.

Through his privileged access to the Presidential Archives and other state and Party archives, Yakovlev is able to put Soviet history into a unique perspective: like Churchill, he was both participant and witness. Indicting the Soviet system from its inception, Yakovlev focuses chapter by chapter on different groups of victims. In all, the author estimates that 60 million citizens were killed during the Soviet years and millions more died of starvation. His book brings into sharper focus than ever before the facts and events of the Soviet Union’s legacy of terror.

Alexander N. Yakovlev is president of the International Democracy Foundation in Moscow and chair of Russia’s Presidential Commission for the Rehabilitation of Victims of Political Repression. He was Soviet ambassador to Canada from 1973 to 1983, then returned to the Soviet Union to become the main architect of perestroika under Gorbachev.
Loading...
or
Not Currently Available for Direct Purchase