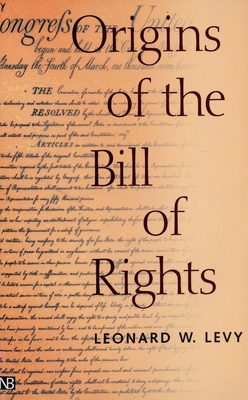 Origins of the Bill of Rights (Yale Contemporary Law Series)

Americans resorted to arms in 1775 not to establish new liberties but to defend old ones, explains constitutional historian Leonard W. Levy in this fascinating history of the origins of the Bill of Rights. Unencumbered by a rigid class system, an arbitrary government, or a single established church squelching dissent, colonial Americans understood freedom in a far more comprehensive and liberal way than the English, Levy shows. He offers here a panoramic view of the liberties secured by the first ten amendments to the Constitution—a penetrating analysis of the background of the Bill of Rights the meanings of each provision of the amendments.

In colonial America, political theory, law, and religion all taught that government was limited. Yet the framing and ratification of the Bill of Rights—in effect a bill of restraints upon the national government—was by no means assured. Levy illuminates the behind-the-scenes maneuverings, public rhetoric, and political motivations that led to each provision. The omission of a bill of rights in the original constitution presented the most serious obstacle to its adoption, despite Federalist claims that a bill of rights was unnecessary. Opponents of the Constitution claimed that inclusion of only some liberties—such as the right to habeas corpus and freedom from ex post facto laws—meant that all other liberties would be lost. But, Levy demonstrates, the people of the United States, aided by a persistent James Madison and by traditions of freedom, had the good sense to support both the Constitution and the Bill of Rights.


"Levy, who is best known for his study of the Fifth Amendment, looks beyond the intentions, explicit or implicit, of the men who drafted the first 10 amendments of the Constitution, to their precedents."—National Law Journal


"Levy has distilled into a brief book a lifetime’s study of the rights that Americans enjoy under the Constitution. If you have ever wondered, for example, why prohibiting a bill of attainder is important, he tells you in a way that you will remember. Levy shares his vast learning in an easily accessible style."—Josephine Pacheco, Key Reporter


"As a scholar, [Levy] is concise, eloquent, magisterial, and persuasive. . . . An excellent introduction to its subject. . . . Consistently fascinating and provocative. . . . Levy has thought harder and written more about the questions he addresses in Origins and Palladium than anyone else alive, and his reasoning and conclusions are always important. For those who would understand and extend the mixture of freedom and suppression that is our legacy, his work is not the last word; but it is a good place to begin."—Garrett Epps, American Prospect


"[A] reference work of the first order. It records multiple voices of a bygone era, reflects on formative political impulses, and journeys into textual interpretation. Contemporary politicians and jurists would be well served to read this engaging book. In fact, we all would."—John Winkle, Rhetoric & Public Affairs


"[I]deal for use in undergraduate courses as an introduction to the origins of the Bill of Rights."—Roberta Sue Alexander, Historian


"The book is an excellent primer as to why a bill of rights was necessary in order to move from the status of natural rights to a situation in which a social compact governed interactions. . . . The overview the book provides on the whole Bill of Rights is illuminating and highly useful."—Communication Booknotes Quarterly


"Pulling together a lifetime of scholarship on liberty, Levy offers a vivid account of the various rights and freedoms that Americans care most deeply about."—Akhil Reed Amar, Yale Law School

Leonard W. Levy is Mellon Professor Emeritus at the Claremont Graduate School and Distinguished Scholar in Residence at Southern Oregon State College. He is the author of thirty-six books, including Origins of the Fifth Amendment, for which he received a Pulitzer Prize.
Loading...
or
Not Currently Available for Direct Purchase