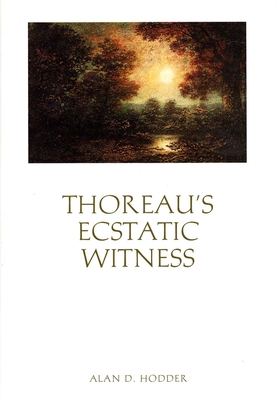 When Henry David Thoreau died in 1862, friends and admirers remembered him as an eccentric man whose outer life was continuously fed by deeper spiritual currents. But scholars have since focused almost exclusively on Thoreau’s literary, political, and scientific contributions. This book offers the first in-depth study of Thoreau’s religious thought and experience. In it Alan D. Hodder recovers the lost spiritual dimension of the writer’s life, revealing a deeply religious man who, despite his rejection of organized religion, possessed a rich inner life, characterized by a sort of personal, experiential, nature-centered, and eclectic spirituality that finds wider expression in America today.

At the heart of Thoreau’s life were episodes of exhilaration in nature that he commonly referred to as his ecstasies. Hodder explores these representations of ecstasy throughout Thoreau’s writings—from the riverside reflections of his first book through Walden and the later journals, when he conceived his journal writing as a spiritual discipline in itself and a kind of forum in which to cultivate experiences of contemplative non-attachment. In doing so, Hodder restores to our understanding the deeper spiritual dimension of Thoreau’s life to which his writings everywhere bear witness.

Alan D. Hodder is associate professor of comparative religion at Hampshire College and author of Emerson’s Rhetoric of Revelation.
Loading...
or
Not Currently Available for Direct Purchase