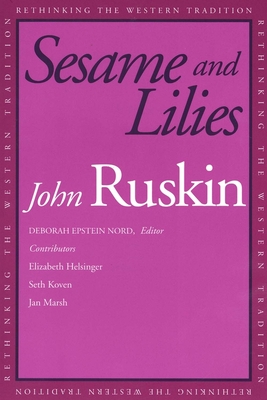 John Ruskin’s Sesame and Lilies, first published in 1865, stands as a classic nineteenth-century statement on the natures and duties of men and women. Although widely popular in its time, the work in its entirety has been out of print since the early twentieth century. This volume returns Sesame and Lilies to easy availability and reunites the two halves of the work: Of Kings’ Treasuries, in which Ruskin critiques Victorian manhood, and Of Queens’ Gardens, in which he counsels women to take their places as the moral guides of men and urges the parents of girls to educate them to this end.

Feminist critics of the 1960s and 1970s regarded Of Queens’ Gardens as an exemplary expression of repressive Victorian ideas about femininity, and they paired it with John Stuart Mill’s more progressive Subjection of Women. This volume, by including the often ignored Of Kings’ Treasuries, offers readers full access to Ruskin’s complex and sometimes contradictory views on men and women. The accompanying essays place Sesame and Lilies within historical debates on men, women, culture, and the family. Elizabeth Helsinger examines the text as a meditation on the pleasures of reading, Seth Koven gives a wide-ranging account of how Victorians read Sesame and Lilies, and Jan Marsh situates the work within controversies over educational reform.

Deborah Epstein Nord is professor of English and director of the Program in the Study of Women and Gender at Princeton University.
Loading...
or support indie stores by buying on