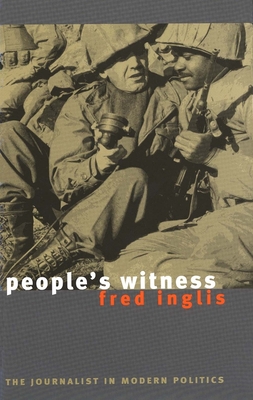 The Journalist in Modern Politics

Now, more than ever, political journalists are central figures in the titanic struggles of modern history, not only telling us about events but also interpreting them and shaping our views. This engrossing book explores the relationship between journalism and politics in the twentieth century and tells the stories of the journalists—both good and bad—who have played major roles.

Fred Inglis tracks the flamboyant biographies of giants of the genre, from the early newspapermen during the Russian revolution to those who reported on the Spanish Civil War, the hideous discoveries at Dachau, and the fall of the Berlin Wall. He scrutinizes news proprietors such as Joseph Pulitzer, Katharine Graham, and Rupert Murdoch; writer-journalists like George Orwell, Evelyn Waugh, Andre Malraux, and Martha Gellhorn; and journalists of conscience—William Shirer in Nazi Germany, James Cameron in Asia, Neil Sheehan in Vietnam, Norman Mailer at the Pentagon, Bob Woodward and Carl Bernstein after Watergate, and others. Inglis examines the great pioneers of broadcast news journalism, notably Ed Murrow, Walter Cronkite, and Alistair Cooke, as well as such contemporary journalists as Christopher Hitchens and the BBC’s John Simpson. He explores the relations between political journalists and their all-powerful proprietors and exposes fascinating instances of pomposity, misjudgment, and downright untruthfulness, as well as moments of courage and responsibility.

In turns wise, insightful, funny, and biting, this sweeping narrative measures each journalist against the best principles of the vocation and silhouettes some of their most dramatic life stories against the moral horizons of the epoch.

Fred Inglis is professor of cultural studies at the University of Sheffield. A long-standing contributor to the Nation, the New Statesman, and the London Independent, he is also the author of numerous books.
Loading...
or
Not Currently Available for Direct Purchase