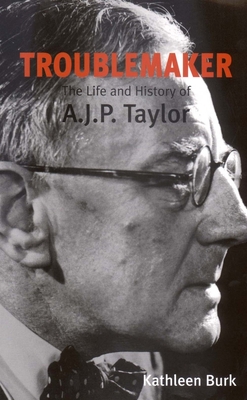 The Life and History of A.J.P Taylor

Popular, prolific, and impassioned, British historian A. J. P. Taylor (1906-1990) was also outspoken, controversial, and quarrelsome. Taylor’s many books, including The Struggle for Mastery in Europe, The Origins of the Second World War, and English History 1914-1945, changed the way history was written and read. His legendary television lectures, delivered live and unscripted, brought history to a huge popular audience. In this masterful biography, Kathleen Burk provides a perceptive account of the life and achievements of Britain’s most famous twentieth-century historian. Burk draws on her personal acquaintance with Taylor in his later years and on an array of previously untapped archival materials to analyze the successes, failures, and controversies of Taylor’s life as historian, Oxford don, broadcast journalist, husband, and friend.

The author sets Taylor’s professional work in the context of the development of history in England during the century, and she traces the relations between his writings and his reactions to domestic and foreign politics. Her account of Taylor’s years at Oxford explores the customs and rituals of the academic community, his colleagues, and the successive crises that beset him personally and professionally. The book also assesses Taylor’s political activities and his self-described role as an “impotent socialist,” his development as a journalist and broadcaster, previously unknown financial aspects of his freelance activities, and his private upheavals, in particular his failed marriages.

Kathleen Burk is professor of modern and contemporary history at the University College London.