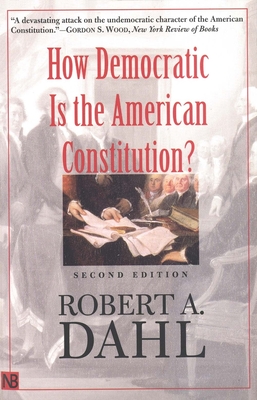 How Democratic Is the American Constitution? (Castle Lecture Series) (Paperback)

By Robert A. Dahl

In this provocative book, one of our most eminent political scientists poses the question, “Why should Americans uphold their constitution?” The vast majority of Americans venerate the Constitution and the democratic principles it embodies, but many also worry that the United States has fallen behind other nations on crucial issues, including economic equality, racial integration, and women’s rights. Robert Dahl explores this vital tension between the Americans’ belief in the legitimacy of their constitution and their belief in the principles of democracy.

Dahl starts with the assumption that the legitimacy of the American Constitution derives solely fromits utility as an instrument of democratic governance. Dahl demonstrates that, due to the context in which it was conceived, our constitution came to incorporate significant antidemocratic elements. Because the Framers of the Constitution had no relevant example of a democratic political system on which to model the American government, many defining aspects of our political system were implemented as a result of short-sightedness or last-minute compromise. Dahl highlights those elements of the American system that are most unusual and potentially antidemocratic: the federal system, the bicameral legislature, judicial review, presidentialism, and the electoral college system.

Praise For How Democratic Is the American Constitution? (Castle Lecture Series)…

Selected by Choice as a 2003 Outstanding Academic Title

Selected by the American Library Association (ALA) as one of "The Best of the Best from the University Presses: Books You Should Know About," 2003
Selected as an outstanding book by University Press Books for Public and Secondary School Libraries
"This book is vintage Dahl at the highest possible level. It is lucid, acutely analytic, literate, and both consistent with the long series of previous books by Dahl and new in its details and broad contours."—Fred Greenstein, Princeton University
or
Buy Here
(This book is on backorder)
Copyright © 2020 American Booksellers Association