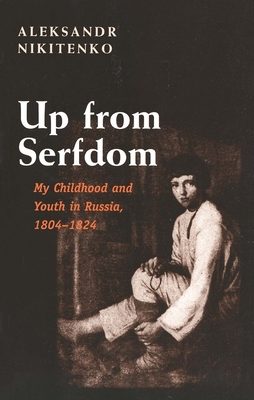 “It was the arbitrary nature of the serfholder’s power that weighed on serfs like Nikitenko, for as they discovered, even the most benevolent patron could turn overnight into an overbearing tyrant. In that respect, serfdom and slavery were the same.” —Peter Kolchin, from the foreword

Aleksandr Nikitenko, descended from once-free Cossacks, was born into serfdom in provincial Russia in 1804. One of 300,000 serfs owned by Count Sheremetev, Nikitenko as a teenager became fiercely determined to gain his freedom. In this memorable and moving book, here translated into English for the first time, Nikitenko recollects the details of his childhood and youth in servitude as well as the six-year struggle that at last delivered him into freedom in 1824. Among the very few autobiographies ever written by an ex-serf, Up from Serfdom providesa unique portrait of serfdom in nineteenth-century Russia and a profoundly clear sense of what such bondage meant to the people, the culture, and the nation.

Rising to eminence as a professor at St. Petersburg University, former serf Nikitenko set about writing his autobiography in 1851, relying on his own diaries (begun at the age of fourteen and maintained throughout his life), his father’s correspondence and documents, and the stories that his parents and grandparents told as he was growing up. He recalls his town, his schooling, his masters and mistresses, and the utter capriciousness of a serf’s existence, illustrated most vividly by his father’s lurching path from comfort to destitution to prison to rehabilitation. Nikitenko’s description of the tragedy, despair, unpredictability, and astounding luck of his youth is a compelling human story that brings to life as never before the experiences of the serf in Russia in the early 1800s.

Helen Saltz Jacobson is a freelance writer and translator living in New Jersey.
Loading...
or
Not Currently Available for Direct Purchase