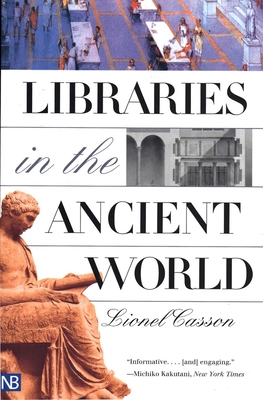 Libraries in the Ancient World

This delightful book tells the story of ancient libraries from their very beginnings, when “books” were clay tablets and writing was a new phenomenon. Renowned classicist Lionel Casson takes us on a lively tour, from the royal libraries of the most ancient Near East, through the private and public libraries of Greece and Rome, down to the first Christian monastic libraries. To the founders of the first public libraries of the Greek world goes the credit for creating the prototype of today’s library buildings and the science of organizing books in them.

Casson recounts the development of ancient library buildings, systems, holdings, and patrons, addressing questions on a wide variety of topics, such as:


• What was the connection between the rise in education and literacy and the growth of libraries?

• Who contributed to the early development of public libraries, especially the great library at Alexandria?

• What did ancient libraries include in their holdings?

• How did ancient libraries acquire books?

• What was the nature of publishing in the Greek and Roman world?

• How did Christianity transform the nature of library holdings?

Just as a library yields unexpected treasures to a meandering browser, this entertaining book offers to its perusers the surprising history of the rise and development of ancient libraries—a fascinating story never told before.


Praise For Libraries in the Ancient World…

"Which came first, the book or the library? This monograph by the classicist Lionel Casson provides a detailed answer that will appeal not just to bibliophiles but to anyone who enjoys picking up odd bits of intriguing historical information."—Amanda Heller, Boston Sunday Globe


"[I]nformative. . . . [A] succinct account of the development of reading, writing and book collecting in Mesopotamia, Greece, and the Roman Empire. . . . The reader can only wish . . . that he follows this short but engaging book with a sequel."—Michiko Kakutani, New York Times


"[A] charming and brief narrative history of the birth (and deaths) of libraries in the ancient world."—Robert Messenger, New York Times Book Review


"[A] book that many readers will enjoy immensely. Yale has produced a handsome volume, well designed by Mary Valencia (off-white paper stock, inviting layout, abundant illustrations), neither too long nor too short, and written in limpid, understated prose by an expert on ancient civilization. For a quick overview of 3,000 years of book making, selling, care and preservation—from roughly 2,500 B.C. to 600 A.D.—this is the roll, or rather codex, to start with. . . . [D]iverting and instructive."—Michael Dirda, Washington Post Book World


"A wonderful book for those who love libraries and the books within."—History Magazine


"Casson’s book is not limited to where and when important libraries existed, it offers a social history transcending the idea of a library as we know it. . . . As appealing to the archaeologist as the bibliophile."—Publishers Weekly


"[R]emarkably readable and provocative. . . . A fascinating and nourishing tour of the history of the glue of civilization."—Michael Pakenham, Baltimore Sun


"I recommend this delightful history to any reader with an interest in the classical world. . . . Casson’s book would be the choice for the reader who wants not only to learn about ancient libraries, but also to experience the humanity of the people who lived in societies so different, and yet so close, to our own."—College & Research Libraries


"Informative. . . . In these pages Casson offers a succinct account of the development of reading, writing and book collecting in Mesopotamia, Greece and the Roman Empire, piecing together his story from archaeological excavations, references found in literary texts and even inscriptions and epitaphs relating to libraries and library donations."—Michiko Kakutani, International Herald Tribune


"This latest work by the Classicist Lionel Casson is both compelling and accessible and will appeal in equal measures to scholar and layperson alike. . . . Casson is to be commended for the succinct and scholarly manner in which this topic was treated. This work proves to be a valuable and worthwhile introduction to the study of the history of libraries, particularly public libraries, for students and the general public."—Jaqueline S. du Toit, Libraries & Culture


"This slim volume is full of pleasures and insights. The author is a very well-known classicist who wears his learning lightly and writes in a manner to make that learning accessible to most. . . . As we teeter on the edge of another age of fragile, endangered texts—electronic this time—we would do well to read, and ponder, the lessons of Professor Casson’s fascinating book."—Michael Gorman, Logos


"For architects, librarians, and archaeologists interested in library history, architecture, and procedures; for the general reader who has a love of libraries and books."—Northeastern Naturalist


"This is a book many of us have been hoping, even longing, to read for a long while. . . . Libraries in the Ancient World is a labor of love. Lionel Casson offers a delightful pilgrimage back to the earliest libraries, to the bright beginnings of recorded human intellect."—J. Harold Ellens, Odyssey


"Writing with elegant prose, interspersed with subtle wit, Casson reconstructs the history of ancient libraries through hints and allusions found in primary accounts, including epigraphs, inscriptions, and letters, as well as secondary resources, particularly archaeological reports related to sites excavated over the centuries. . . . Casson’s history not only captures the imagination of the layman, but also whets the appetite of the historian. . . . Libraries of the Ancient World willappeal to a wide audience and as such will be a popular addition to both public and academic libraries."—Plummer Alston Jones, Jr., Portal: Libraries and the Academy


"Clear and comprehensive. . . . The story of these institutions is told here with deceptive ease, but only a scholar of Casson’s profound learning could sift with sure hands the many different kinds of evidence from which the story must be built up. . . . Anyone interested in library architecture, procedures, or financing will find this book rewarding. So, in fact, will anyone just interested in books."—Garry Wills, Preservation


"Utilizing his tremendous scholarship in history, archaeology, and the classics, Casson paints a fascinating picture of literature, literacy, and the development of libraries through Greek, Roman, and early Christian times. . . . Casson’s book is a wonderful trip into a literary world that bears a striking resemblance to our own."—John Steingraeber, Ruminator Review


"I would commend this volume as a pleasurable and informative read for anyone interested in the social history of libraries and knowledge."—Ellen Bradshaw Aitken, Sixteenth Century Journal


"This informative volume provides an excellent introduction into an area often overlooked by both classical scholars and librarians alike. Casson’s rich supply of bibliographical citations successfully supports his research while also supplying the reader opportunities for further research on early librarianship. Casson’s work is a tribute to an ancient profession. . . . Well-written, well-documented, and destined to be cited for many years to come. The author has accomplished his goal: to introduce us to ancient libraries."—Anthony Oddo, The Classical Outlook


"This wonderful book assembles much of what is known about libraries from caches of Sumerian clay tablets to the foundation of monastic libraries in the 7th century AD. . . . Not just a fascinating tale of the contributions of Aristotle, the Alexandrian Library of Ptolemy, the great private and public libraries of Rome, this slender book considers from a most apt vantage point the nature of education and culture."—Virginia Quarterly Review


"This wonderful book . . . considers from a most apt vantage point the nature of education and culture."—Virginia Quarterly Review

"[A] short and elegant history of the early growth of libraries."—Amy Schwartz, Wilson Quarterly

"A wonderful book on a wonderful subject. Casson knows what is interesting and tells us in spellbinding style."—G.W. Bowersock, Institute for Advanced Study

Lionel Casson is Professor Emeritus of Classics, New York University, and the author of Ships and Seamanship in the Ancient World as well as many other books on ancient maritime history and ancient travel.