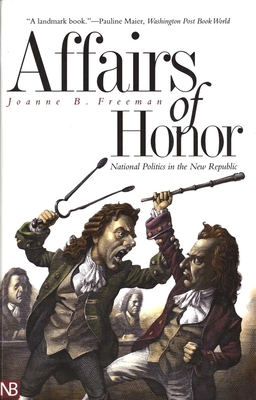 National Politics in the New Republic

By Joanne B. Freeman

In this extraordinary book, Joanne Freeman offers a major reassessment of political culture in the early years of the American republic. By exploring both the public actions and private papers of key figures such as Thomas Jefferson, Aaron Burr, and Alexander Hamilton, Freeman reveals an alien and profoundly unstable political world grounded on the code of honor. In the absence of a party system and with few examples to guide America’s experiment in republican governance, the rituals and rhetoric of honor provided ground rules for political combat. Gossip, print warfare, and dueling were tools used to jostle for status and form alliances in an otherwise unstructured political realm. These political weapons were all deployed in the tumultuous presidential election of 1800—an event that nearly toppled the new republic.

By illuminating this culture of honor, Freeman offers new understandings of some of the most perplexing events of early American history, including the notorious duel between Burr and Hamilton. A major reconsideration of early American politics, Affairs of Honor offers a profoundly human look at the anxieties and political realities of leaders struggling to define themselves and their role in the new nation.

Joanne B. Freeman is Professor of History at Yale University. She recently appeared in the PBS American Experience documentary "The Duel," exploring the fatal 1804 clash between Burr and Hamilton. She is also the editor of Alexander Hamilton: Writings, published by the Library of America.

Praise For Affairs of Honor: National Politics in the New Republic…

"A landmark book."—Pauline Maier, Washington Post Book World
". . . [A] romp through . . . personal notes and public papers . . . both well-researched and well-written . . . lively and idiosyncratic."—Scott Bernard Nelson, Boston Globe
". . . [A] landmark book that demands the attention of everyone with a serious interest in the history of American politics."—Pauline Maier, Washington Post
"[A] lively book."—David S. Broder, Washington Post
"Admirable and entertaining. . . . Ms. Freeman evaluates the weapons of 'honor defense'—gossip, letters, newspapers and even dueling—and she does so with a vigor befitting the lively political culture of the 1790s."—Bill Kauffman, Wall Street Journal
"Affairs of Honor isa romp through the personal notes and public papers of Thomas Jefferson, John Adams, Alexander Hamilton, Aaron Burr, and others who joined forces against the British monarchy and then fought one another about how to replace it. . . . [It] is both well-researched and well-written, providing a read nearly as lively and idiosyncratic as the Founding Fathers themselves."—Scott Bernard Nelson, Boston Globe
"[Freeman’s] explanation of the rules by which elite politicians fought is important. It allows a fuller understanding of contemporary political writings and of events such as the Burr-Hamilton duel, the elections of 1796 and 1800, even the 1798 Sedition Act. . . . Because [the book] lets us see the past as contemporaries saw it and imaginatively understand what they did and why, Affairs of Honor is, indeed, a landmark book that demands the attention of everyone with a serious interest in the history of American politics."—Pauline Maier, Washington Post Book World
"Freeman’s prose is lively, and she balances entertaining narrative with sharp analysis. The last few years have seen a spate of books about the founding fathers and the early republic: Freeman’s elegant study of honor and politics in the new nation will easily tower over most of them."—Publishers Weekly (starred review)
". . . .[H]ard-hitting, fast-paced, comprehensively researched . . . one of the most intelligent and innovative studies in early American political culture. . ."—Andrew Burstein, American Scholar
"[An] excellent and thought-provoking new study . . . a masterful command of primary sources . . . [that] reaches out to a general audience."—Marc M. Arkin, The New Criterion
"[Freeman] has much to teach political theorists . . . historians [and] other[s] with a[n] . . . interest in how to live . . . [An] excellent book."—Harvey Mansfield, Weekly Standard
"Sex-tinged scandals, political mudslinging, sectarian division, tabloid exposes: Bill Clinton may have had a bad time, but the Founding Fathers had it worse. . . . To judge by Freeman’s vivid anecdotes and smart analysis, it’s a wonder the republic survived the Founders. Good reading, especially for students of political culture and early American history."—Kirkus Reviews
"Affairs of Honor .. . has much to teach political theorists and American historians, as well as other souls with a merely personal interest in how to live. . . . [An] excellent book."—Harvey Mansfield, Weekly Standard
"A landmark revision of political history."—Chronicle of Higher Education
"[A] landmark study of Hamilton and the founders."—Jeff Sharlet, Chronicle of Higher Education
Winner of the Best Book Award in the field for 2001, sponsored by the Society for Historians of the Early American Republic
"Affairs of Honor stunninglytransforms our understanding of the Founding Fathers and their political culture. Joanne Freeman reveals that in their half-Anglicized, half-democratic political culture, early American politicians bound themselves to the aims of reputation, regional loyalty, and, above all, honor. In addition, she brilliantly dissects the roles of gossip, self-vindicating articles and tracts, and discrete hierarchies of power. Duels, she persuades us, were fought to retain an insulted patron’s political alliances as much as to vindicate personal principle. Although alien to our notions of fairness, the actors in Affairs of Honor pursuedpower in ways not altogether different from the realities (and even sleaziness) of today’s partisanship. This dynamic and penetrating work will be debated—and increasingly appreciated—for many years to come."—Bertram Wyatt-Brown, University of Florida, author of Southern Honor: Ethics and Behavior in The Old South
"Professor Freeman not only sheds new light on that complex code–cult?–of honor in American eighteenth-century life and politics which made inevitable the Burr-Hamilton duel, but she has also, à propos, written the clearest account to date of the presidential election of 1800, in which Jefferson and Burr tied for first place, causing Jefferson to behave with more than his usual subtlety while imputing, characteristically, bad faith to his rival Burr, who, according to their original agreement, raised not a finger in his own behalf and so behaved honorably. After two centuries, it is nice to know what really went on in that Dark Age when we had no kindly Supreme Court to determine our elections 5–4."—Gore Vidal
"Affairs of Honor isa landmark work in the history of our national origins. With considerable style and grace, Freeman shows that the central story line must include such old-fashioned notions as honor and character, and that, in her capable hands, political history is once again alive and well."—Joseph J. Ellis, author of Founding Brothers: The Revolutionary Generation
"Affairs of Honor is a scintillating contribution to the recent revival of interest in the political culture of the early Republic. Joanne Freeman sensitively analyzes how matters of personal trust and its evil twin, suspicion, worked to complicate the transition from old patterns of gentry politics to the new modes of organized partisan competition. Vividly written and analytically incisive, Affairs of Honor heralds the debut of an imaginative and perceptive scholar."—Jack Rakove, Coe Professor of History and American Studies, and Professor of Political Science, Stanford University
"Affairs of Honor isthe most important book that has been written on the origins of American politics in many, many years. Joanne Freeman’s work is enormously original, and the scholarship is impeccable. This book is a real breakthrough—we’ll never look at politics in this period in the same way."—Jan Lewis, Rutgers University