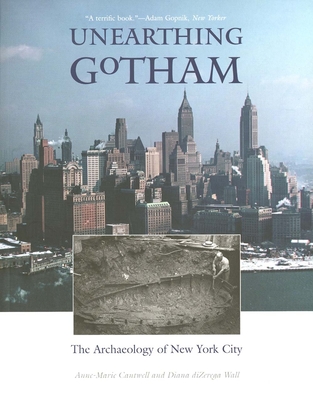 The Archaeology of New York City

Under the teeming metropolis that is present-day New York City lie the buried remains of long-lost worlds. The remnants of nineteenth-century New York reveal much about its inhabitants and neighborhoods, from fashionable Washington Square to the notorious Five Points. Underneath there are traces of the Dutch and English colonists who arrived in the area in the seventeenth century, as well as of the Africans they enslaved. And beneath all these layers is the land that Native Americans occupied for hundreds of generations from their first arrival eleven thousand years ago. Now two distinguished archaeologists draw on the results of more than a century of excavations to relate the interconnected stories of these different peoples who shared and shaped the land that makes up the modern city.

In treating New York’s five boroughs as one enormous archaeological site, Anne-Marie Cantwell and Diana diZerega Wall weave Native American, colonial, and post-colonial history into an absorbing, panoramic narrative. They also describe the work of the archaeologists who uncovered this evidence—nineteenth-century pioneers, concerned citizens, and today’s professionals. In the process, Cantwell and Wall raise provocative questions about the nature of cities, urbanization, the colonial experience, Indian life, the family, and the use of space. Engagingly written and abundantly illustrated, Unearthing Gotham offers a fresh perspective on the richness of the American legacy.