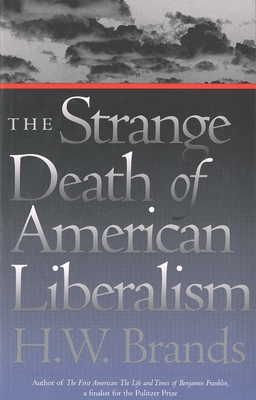 The Strange Death of American Liberalism

In this provocative book, H. W. Brands confronts the vital question of why an ever-increasing number of Americans do not trust the federal government to improve their lives and to heal major social ills. How is it that government has come to be seen as the source of many of our problems, rather than the potential means of their solution? How has the word liberal become a term of abuse in American political discourse?

From the Revolution on, argues Brands, Americans have been chronically skeptical of their government. This book succinctly traces this skepticism, demonstrating that it is only during periods of war that Americans have set aside their distrust and looked to their government to defend them. The Cold War, Brands shows, created an extended—and historically anomalous—period of dependence, thereby allowing for the massive expansion of the American welfare state. Since the 1970s, and the devastating blow dealt to Cold War ideology by America’s defeat in Vietnam, Americans have returned to their characteristic distrust of government. With the collapse of the Soviet Union in 1991, Brands contends, the fate of American liberalism was sealed—and we continue to live with the consequences of its demise.