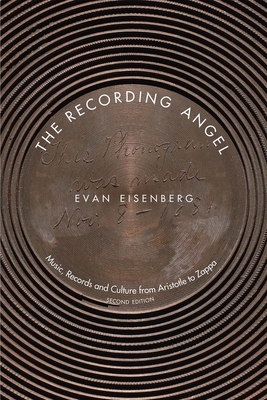 Music, Records and Culture from Aristotle to Zappa

First published in 1987 and now considered a classic, The Recording Angel charts the ways in which the phonograph and its cousins have transformed our culture. In a new Afterword, Evan Eisenberg shows how digital technology, file trading, and other recent developments are accelerating—or reversing—these trends. Influential and provocative, The Recording Angel is required reading for anyone who cares about the effect recording has had—and will have—on our experience of music.


Praise For The Recording Angel: Music, Records and Culture from Aristotle to Zappa…

Praise for the first edition:“Witty, perceptive, informed, and dazzlingly allusive.”—David Hamilton, The Nation

“[The Recording Angel] throws out one arresting idea after another.”—Timothy Day, author of A Century of Recorded Music

“A marvelous book, unlike any other.”—Garry Giddins

“A work of great originality and constantly stimulating argument.”—Geoffrey O’Brien

Evan Eisenberg’s writings on music, culture, and technology have appeared in The New Republic, The Village Voice, The New Yorker, The Nation, and other periodicals. His most recent book is The Ecology of Eden.
or
Not Currently Available for Direct Purchase