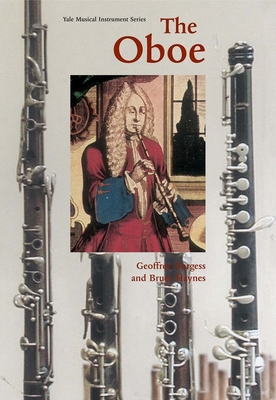 The oboe, including its earlier forms the shawm and the hautboy, is an instrument with a long and rich history. In this book two distinguished oboist-musicologists trace that history from its beginnings to the present time, discussing how and why the oboe evolved, what music was written for it, and which players were prominent.

Geoffrey Burgess and Bruce Haynes begin by describing the oboe’s prehistory and subsequent development out of the shawm in the mid-seventeenth century. They then examine later stages of the instrument, from the classical hautboy to the transition to a keyed oboe and eventually the Conservatoire-system oboe. The authors consider the instrument’s place in Romantic and Modernist music and analyze traditional and avant-garde developments after World War II. Noting the oboe’s appearance in paintings and other iconography, as well as in distinctive musical contexts, they examine what this reveals about the instrument’s social function in different eras. Throughout the book they discuss the great performers, from the pioneers of the seventeenth century to the traveling virtuosi of the eighteenth, the masters of the romantic period and the legends of the twentieth century such as Gillet, Goossens, Tabuteau, and Holliger. With its extensive illustrations, useful technical appendices, and discography, this is a comprehensive and authoritative volume that will be the essential companion for every woodwind student and performer.

“A welcome addition to the oboe literature. . . . Burgess and Haynes draw on their vast experience, knowledge and enthusiasm for the oboe to produce a book that will be invaluable to all players and enjoyable for the general reader.”—Rachel Pankhurst, Muso

"The Oboe is notable for its scholarly integrity and breadth. . . . The book is a highly welcome addition to the publications on this topic currently available. It contains a huge amount of information, presented in a clear, lively, and interesting way."—Samantha Owens, Journal of the American Musical Instrument Society
— Samantha Owens

"[This book] is very enjoyable to read and packed with information."—Gail Hennessy, Early Music Today

Geoffrey Burgess, who has taught historical musicology at Duke University and SUNY, Stony Brook, is an active performing oboist. Bruce Haynes, who is associate professor at the University of Montreal, is a world renowned hautboist.
Loading...
or
Not Currently Available for Direct Purchase