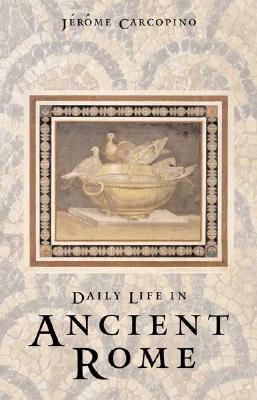 The People and the City at the Height of the Empire

This classic book brings to life imperial Rome as it was during the second century A.D., the time of Trajan and Hadrian, Marcus Aurelius, and Commodus. It was a period marked by lavish displays of wealth, a dazzling cultural mix, and the advent of Christianity. The splendor and squalor of the city, the spectacles, and the day’s routines are reconstructed from an immense fund of archaeological evidence and from vivid descriptions by ancient poets, satirists, letter-writers, and novelists—from Petronius to Pliny the Younger. In a new Introduction, the eminent classicist Mary Beard appraises the book’s enduring—and sometimes surprising—influence and its value for general readers and students. She also provides an up-to-date bibliographic essay.

“Carcopino’s pledge to his readers was to open up to them some traces of the world that lay underneath the grandeur that remains the public face of ancient Rome. . . . No one has ever done it better.”—Mary Beard, from the Introduction

Jérôme Carcopino (1881–1970) was the author of many books on ancient Rome including César and Ovid and the Cult of Isis. Mary Beard is the author or coauthor of numerous books including The Parthenon, Classics: A Very Short Introduction, Classical Art: From Greece to Rome, and Religions of Rome.
Loading...
or
Not Currently Available for Direct Purchase