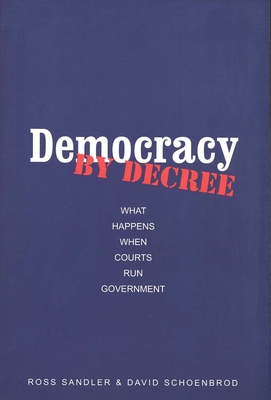 What Happens When Courts Run Government

Schools, welfare agencies, and a wide variety of other state and local institutions of vital importance to citizens are actually controlled by attorneys and judges rather than governors and mayors. In this valuable book, Ross Sandler and David Schoenbrod explain how this has come to pass, why it has resulted in service to the public that is worse, not better, and what can be done to restore control of these programs to democratically elected—and accountable—officials.

Sandler and Schoenbrod tell how the courts, with the best intentions and often with the approval of elected officials, came to control ordinary policy making through court decrees. These court regimes, they assert, impose rigid and often ancient detailed plans that can founder on reality. Newly elected officials, who may wish to alter the plans in response to the changing wishes of voters, cannot do so unless attorneys, court-appointed functionaries, and lower-echelon officials agree. The result is neither judicial government nor good government, say Sandler and Schoenbrod, and they offer practical reforms that would set governments free from this judicial stranglehold, allow courts to do their legitimate job of protecting rights, and strengthen democracy.


Praise For Democracy by Decree: What Happens When Courts Run Government…

“A compelling story with a powerful argument backed by lots of fascinating stories about judicial shipwrecks.”—James B. Jacobs, New York University School of Law


"Democracy by Decree shows how courts can protect rights and still let mayors and governors do their job.”—John Sexton, president of NYU and dean of NYU Law School


“A brilliant, well-written and brave account of how federal courts have distorted our political system by taking control of complex institutions like schools and prisons--sometimes for decades--instead of enforcing rights, which is their proper domain.”
--Diane Ravitch, New York University

Ross Sandler is professor of law and director of New York Law School’s Center for New York City Law. David Schoenbrod is a professor at New York Law School and author of Power Without Responsibility: How Congress Abuses the People through Delegation, published by Yale University Press.
Loading...
or support indie stores by buying on