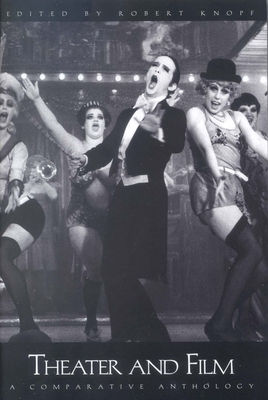 This is the first book in more than twenty-five years to examine the complex historical, cultural, and aesthetic relationship between theater and film, and the effect that each has had on the other’s development.
Robert Knopf here assembles essays from performers, directors, writers, and critics that illuminate this ongoing inquiry. The book is divided into five parts—historical influence, comparisons and contrasts, writing, directing, and acting—with interludes by major artists whose work and words have shaped the development of theater and film. A comprehensive bibliography and filmography support further work in this area.
The book contains contributions from Susan Sontag, Stanley Kauffmann, Sarah Bey-Cheng, Bertolt Brecht, Ingmar Bergman, Harold Pinter, David Mamet, Julia Taymor, Judi Dench, Sam Waterston, Orson Welles, Antonin Artaud, and Milos Forman, among others.

Praise For Theater and Film: A Comparative Anthology…

“Robert Knopf’s timely and unique anthology gathers some of the most important essays that bridge theater and film theory. It will prove to be an essential text on the subject.”—David Krasner, Associate Professor of Theater Studies and Director of Undergraduate Studies, Yale University

Robert Knopf is Professor and Chair of the Department of Theater and Dance at the State University of New York at Buffalo. He is the author of The Theater and Cinema of Buster Keaton (1999) and co-editor of Theater of the Avant-Garde, 1890-1950, published by Yale University Press.
Loading...
or support indie stores by buying on