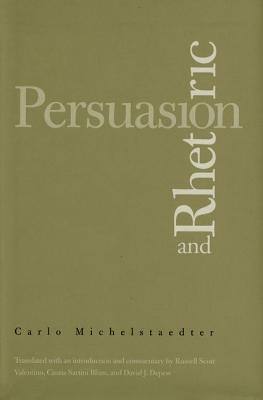 This translation of Carlo Michelstaedter's Persuasion and Rhetoric brings the powerful and original work of a seminal cultural figure to English-language readers for the first time. Ostensibly a commentary on Plato's and Aristotle's relation to the pre-Socratic philosophers, Michelstaedter's deeply personal book is an extraordinary rhetorical feat that reflects the author's struggle to make sense of modern life. This edition includes an introduction discussing his life and work, an extensive bibliography, notes to introduce each chapter, and critical notes illuminating the text.
Within hours of completing Persuasion and Rhetoric, his doctoral thesis, 23-year-old Michelstaedter shot himself to death. The text he left behind has proved to be one of the most trenchant and influential studies in modern rhetoric, a work that develops Nietzschean themes and anticipates the conclusions of, among others, Martin Heidegger. Publication of the book in English is an event of great magnitude for students of Italian philosophy, rhetoric, and literature as well as the culture of Mitteleuropa.


Praise For Persuasion and Rhetoric…

"Michelstaedter's book is a still undervalued masterpiece of the XIXth century."—Umberto Eco


"Like his contemporaries Otto Weininger and Franz Kafka, Carlo Michelstaedter was an intriguing ‘double’ minority figure in the Austro-Hungarian Empire. His one short book remains an extraordinary document of the early twentieth-century, offering a summa of many spiritual currents issuing into German and Austrian expressionism. It is essential reading for anyone interested in modern European literature and philosophy."—Thomas Harrison, author of 1910: The Emancipation of Dissonance

Carlo Michelstaedter (18871910), a philosopher, painter, and poet, is considered an emblematic intellectual of the twentieth century. Russell Scott Valentino is associate professor of Russian and of comparative literature, Cinzia Sartini Blum is associate professor of Italian, and David J. Depew is professor of communication studies and executive director of the Project on the Rhetoric of Inquiry, all at the University of Iowa."
Loading...
or
Not Currently Available for Direct Purchase