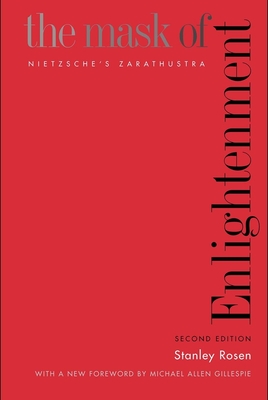 The Mask of Enlightenment

This landmark study is a detailed textual and thematic analysis of one of Nietzsche’s most important but least understood works. Stanley Rosen argues that in Zarathustra Nietzsche lays the groundwork for philosophical and political revolution, proposing a change in humanity’s condition that would be achieved by eliminating the decadent existing race and breeding a new race to take its place. Rosen discusses Nietzsche’s systematically duplicitous rhetoric of esoteric messages in Zarathustra, and he places the book in the contexts of Greek, Christian, Enlightenment, and postmodernist thought.

Praise For The Mask of Enlightenment: Nietzsche’s Zarathustra, Second Edition…

"Rosen’s book represents an important contribution to the discussion of Nietzsche as political philosopher."—Kathleen Higgins, University of Texas, Austin

Stanley Rosen is Border Parker Bowne Professor of Philosophy at Boston University. He is the author of many books including Plato’s Statesman and The Elusiveness of the Ordinary, both published by Yale University Press.
Loading...
or
Not Currently Available for Direct Purchase