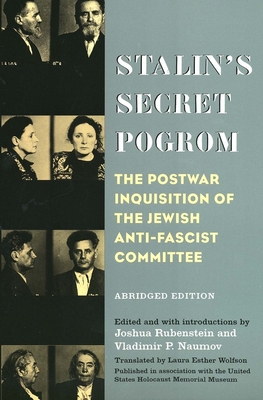 In the spring and summer of 1952, fifteen Soviet Jews, including five prominent Yiddish writers and poets, were secretly tried and convicted; multiple executions soon followed in the basement of Moscow’s Lubyanka prison. The defendants were falsely charged with treason and espionage because of their involvement in the Jewish Anti-Fascist Committee, and because of their heartfelt response as Jews to Nazi atrocities on occupied Soviet territory. Stalin had created the committee to rally support for the Soviet Union during World War II, but he then disbanded it after the war as his paranoia mounted about Soviet Jews.

For many years, a host of myths surrounded the case against the committee. Now this book, which presents an abridged version of the long-suppressed transcript of the trial, reveals the Kremlin’s machinery of destruction. Joshua Rubenstein provides annotations about the players and events surrounding the case. In a long introduction, drawing on newly released documents in Moscow archives and on interviews with relatives of the defendants in Israel, Russia, and the United States, Rubenstein also sets the trial in historical and political context and offers a vivid account of Stalin’s anti-Semitic campaign.

Joshua Rubenstein is the Northeast Regional Director of Amnesty International USA and a longtime associate at Harvard University’s Davis Center for Russian Studies. He is also the author of Tangled Loyalties: The Life and Times of Ilya Ehrenburg. Vladimir P. Naumov is executive secretary of the Presidential Commission of the Russian Federation on the Rehabilitation of Victims of Political Repression and editor of the Russian-language edition of this volume.
Loading...
or support indie stores by buying on