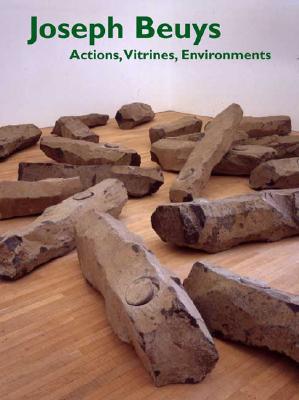 Joseph Beuys (1921–1986)—a German sculptor and performance artist--became one of the most influential figures in modern and contemporary art. His charismatic presence, extraordinary life, and unconventional artistic style (incorporating ritualized movement and sound, and materials such as fat, felt, earth, honey, blood, and even dead animals) gained him international notoriety during the 1960s, 70s, and 80s. Beuys’s innovative influence is particularly felt in the field of sculpture, whose definition he expanded to encompass performance art, vitrine cases, and site-specific environments.
This beautifully illustrated book investigates Beuys’s sculpture, arguably the most fundamental portion of his artistic work, as well as his extraordinary influence. Featured objects include a stunning selection of Beuys’s remarkable vitrines—sly cousins of standard museum presentations, featuring both hand-made and found objects serving as “exhibitions” on Beuys’s own topics; blackboards on which he recorded his lectures and performances; room-sized environments; and many other sculptural projects that frequently served as physical documentation for Beuys’s performances.
With a comprehensive chronology of Beuys’s activities as an artist and activist, this book is essential for those interested in the life, work, and legacy of one of the art world’s most intriguing figures.

Mark Rosenthal is adjunct curator at The Menil Collection; Sean Rainbird is curator at the Tate Modern; and Claudia Schmuckli, formerly assistant curator at the Museum of Modern Art, is an independent critic of contemporary art.