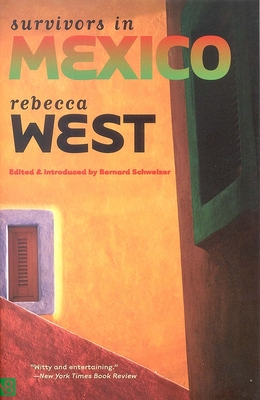 Rebecca West’s never-before-published Survivors in Mexico brings to readers a daring and provocative work by a major twentieth-century author. An exhilarating exploration of Mexican history, religion, art, and culture, it explores the inner lives of figures ranging from Cortés and Montezuma to Diego Rivera, Frida Kahlo, and Leon Trotsky.
“Witty and entertaining, substantive and reflective, insightful and well documented, in splendid and uncommon prose, Rebecca West’s travelogue . . . is a model of British sophistication and knack for seeing the other.”—Jorge G. Castañeda, New York Times Book Review
“An enthrallingly readable book . . . full of sharp impressions and stimulating insights.”—Merle Rubin, Los Angeles Times Book Review
“Luscious reading. . . . The book succeeds beautifully as a travelogue thanks to West’s intellect and experience, with Mexico serving as the vehicle for it all.”—Sam Quinones, Washington Post Book World

Praise For Survivors in Mexico…

"A volume that makes for luscious reading. A good portion of the book is West's survey and commentary on the collision of Spain and the Aztecs—among the most wondrous tales human history has to tell. . . . The book succeeds beautifully as a travelogue thanks to West's intellect and experience, with Mexico serving as the vehicle for it all. . . . Readers should come to Survivors in Mexico expecting less of Mexico and more of the vital mind of Rebecca West, but that's not a bad thing."—Sam Quinones, Washington Post Book World


"An enthrallingly readable book. . . . Very few writers have managed to be more knowledgeable and profound in their thinking. . . . Survivors in Mexico is an astonishingly fertile book, full of sharp impressions and stimulating insights, whether West is pondering the question of why miners have been among the most mistreated of all laborers or speculating about the social and political effects of the Aztecs' lack of domesticated animals. . . . West's deeply personal take on Mexico is ultimately a meditation on the meaning of life itself."—Merle Rubin, Los Angeles Times Book Review

Rebecca West (1892–1983) wrote prolifically through most of the twentieth century. She is best known for her travel memoir/historical meditation on Yugoslavia, Black Lamb and Grey Falcon. Bernard Schweizer is assistant professor of English at Long Island University (Brooklyn). He is the author of Rebecca West: Heroism, Rebellion and the Female Epic and Radicals on the Road: The Politics of English Travel Writing in the 1930s.
Loading...
or support indie stores by buying on
(This book is on backorder)