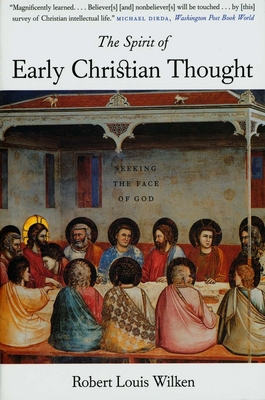 The Spirit of Early Christian Thought

Seeking the Face of God

"A delight to read. It is written as history ought to be, especially for nonspecialist readers."—Richard A. Kauffman, Christian Century

In this eloquent introduction to early Christian thought, eminent religious historian Robert Louis Wilken examines the tradition that such figures as St. Augustine, Gregory of Nyssa, and others set in place. These early thinkers constructed a new intellectual and spiritual world, Wilken shows, and they can still be heard as living voices in the modern world.

In chapters on topics including early Christian worship, Christian poetry and the spiritual life, the Trinity, Christ, the Bible, and icons, Wilken shows that the energy and vitality of early Christianity arose from within the life of the Church. While early Christian thinkers drew on the philosophical and rhetorical traditions of the ancient world, it was the versatile vocabulary of the Bible that loosened their tongues and minds and allowed them to construct the world anew, intellectually and spiritually. These thinkers were not seeking to invent a world of ideas, Wilken shows, but rather to win the hearts of men and women and to change their lives.
Early Christian thinkers set in place a foundation that has endured. Their writings are an irreplaceable inheritance, and Wilken shows that they can still be heard as living voices within contemporary culture.

Praise For The Spirit of Early Christian Thought: Seeking the Face of God…

"[A] magnificently learned, deeply felt and surprisingly pellucid set of essays. Anyone who approaches The Spirit of Early Christian Thought with a welcoming spirit and patient attention will learn from it. Certainly, an attentive reader of Wilken, whether believer or nonbeliever, will be touched anew by his survey of Christian intellectual life."—Michael Dirda, Washington Post Book World

"The book is a compelling invitation to enter more deeply into the contemplative hearts of the early Church Fathers."—Kay Kettenhofen, Cistercian Studies Quarterly

"An interpretation of early Christian thought for the general reader. . . . A good general introduction to the writings of Christian antiquity, this is appropriate for both public and academic collections."—Library Journal

"We recommend (The Spirit of Early Christian Thought) as outstanding. . . . Any Christian concerned that the traditional Christian faith and its consequent Way of Life is often disparaged as 'irrelevant' and 'refuses to face philosophical and social criticism' will find this book a gold mine."—Doxa: A Quarterly Review Serving the Orthodox Church

"This is not a book written for the academy but for all readers."—Luke Timothy Johnson, America

"This is not a book written for the academy but for all readers. It is not driven by theoretical or ideological agendas but is the fruit of years of patient and affectionate reading. It is not a young scholar's bid to make a name but a senior scholar's effort to share the fruit of learning. It is not marked by a hermeneutics of suspicion but by a hermeneutics of generosity. As such, it provides for a new generation of readers a sense of what is important about those astonishing teachers of the early church who instructed the ages after them."—Luke Timothy Johnson, America

"[A book of] great learning. . . . Written . . . for all readers. . . . It provides for a new generation of readers a sense of what is important about those astonishing teachers of the early church who instructed the ages after them."—Luke Timothy Johnson, Pam Kingsbury, Richard Haslam, America

"The Spirit of Early Christian Thought is a delight to read. It is written as history ought to be, especially for nonspecialist readers."—Richard A. Kauffman, Christian Century

"[His] unusual insight gives a fresh perspective to everything Wilken says as he goes through the usual history of the councils and theological controversies."—Robert Royal, Crisis Magazine

"Get The Spirit of Early Christian Thought and read it. Read it slowly, letting Wilken take you by the hand. . . . Let [Wilken] show you a more excellent way."—Richard John Neuhaus, First Things

"Read [this book] slowly, letting Wilken take you by the hand. . . . Let [him] show you a more excellent way."—Richard John Neuhaus, First Things

"A sensitive, essayistic overview of how pre-medieval Christians engaged in the life of the mind, and the role that intellect played in their work and worship. . . . This excellent book is a window into a very rich intellectual world."—Michael Potemra, National Review

"This book evidences many years of careful study and thoughtful reflection. . . . Beautifully written and accessible to the non-specialist."—Bryan Hollon, Perspectives in Religious Studies


"It captures perfectly for the general reader, in non-technical terms and relying on the words of the fathers themselves, the all pervasive theme that thinking is an essential component of believing, and that Christianity always has been a religion that is moral, intellectual, and liturgical."—Casimir Bernas, Religious Studies Review

"An eminent scholar of early Christianity . . . has again put scholarship on early Christianity in his debt. . . . Stimulating and illuminating. . . . Anyone interested in learning about how the church fathers thought and taught can read this book with profit. It should be in the library of every university, seminary, and church. . . . It is warmly recommended."—James R. Payton, Jr., St. Vladimir’s Theological Quarterly

"A stunning achievement aimed at the general reader. . . . Rich in learning and insight. It is one of the best and most meaningful Christian books this reviewer has ever read."—W. L. Prehn, The Living Church

"A thoroughly persuasive case. . . . Accurately and convincingly argues that the early Church’s approach to its most characteristic issues is historical, biblical, and incarnate, not just timeless, philosophical, and spiritual. . . . An effective, dependable, even inspiring introduction to early Christian theology. . . . Masterfully and attractively presented."—Joseph G. Mueller, Theological Studies

"Not only an informative and highly readable account of patristic theology, but an inspiring one at that. This is the rare book that makes accessible to the lay reader some of the most vital, and often complex, issues confronting the Church Fathers, while at the same time holding the attention of the academic critic."—Ian Christopher Levy, Lexington Theological Seminary

"Intended for the general reader, The Spirit of Early Christian Thought provides a well-written and sympathetic portrayal of early Christian ways of thinking about God and creation. The author's account, which includes chapters on liturgy, scripture, doctrine, faith, poetry, political theory, icons, and ethics, is broad yet selective, and it succeeds in its aim of conveying a feel for its subject. The book has already been highly praised by patristics scholars."—Lynne Spellman, Ancient Philosophy

"This book is an elegant introduction to the Fathers of the Church. Giants such as Origen and Gregory of Nyssa, Augustine and Maximus the Confessor move gracefully through its pages, teaching us how the Church lives by the Word of God, which itself lives in the Church, proclaiming the wonderful deeds of God to all the world."—Avery Cardinal Dulles, S.J., Fordham University

"By turns scholarly, contemplative, and argumentative, this is an exposition in which the early Christian writers speak for themselves—and to us."—Jaroslav Pelikan, author of The Christian Tradition


"Robert Wilken delivers exactly what his title promises: not a history, but a display of how the ancient church's mind worked. An accessible and delightful read, backed by immense scholarship."—Robert W. Jenson, Center of Theological Inquiry, Princeton N.J.


"This book is the welcome fruit of long study by a scholar of the first rank. To be sure, scholars will profit from the book, but the real beneficiaries will be thoughtful readers who want to understand what the early Christian church was all about."—Rowan Greer, Professor Emeritus of Anglican Studies, Yale University


"Robert Wilken offers here a rich and nuanced interpretation of the Christian faith as seen through the eyes of its most formative exponents—the theologians, bishops, poets, and hymn writers of the early church. Written with clarity and conviction, this book is a window onto the landscape of the Christian soul."—Timothy George, Dean of Beeson Divinity School of Samford University and executive editor of Christianity Today

Robert Louis Wilken is William R. Kenan Professor of the History of Christianity at the University of Virginia. His previous books include The Land Called Holy.
Loading...
or support indie stores by buying on
(This book is on backorder)