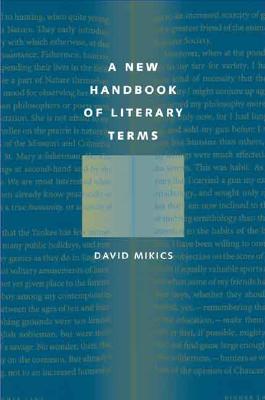 A New Handbook of Literary Terms offers a lively, informative guide to words and concepts that every student of literature needs to know. Mikics’s definitions are essayistic, witty, learned, and always a pleasure to read. They sketch the derivation and history of each term, including especially lucid explanations of verse forms and providing a firm sense of literary periods and movements from classicism to postmodernism. The Handbook also supplies a helpful map to the intricate and at times confusing terrain of literary theory at the beginning of the twenty-first century: the author has designated a series of terms, from New Criticism to queer theory, that serves as a concise but thorough introduction to recent developments in literary study.

Mikics’s Handbook is ideal for classroom use at all levels, from freshman to graduate. Instructors can assign individual entries, many of which are well-shaped essays in their own right. Useful bibliographical suggestions are given at the end of most entries. The Handbook’s enjoyable style and thoughtful perspective will encourage students to browse and learn more. Every reader of literature will want to own this compact, delightfully written guide.

"It is aimed at a spread of abilities, and manages to be all things to all readers.  I found it good to read—as enjoyable as any theoretical manuscript I''ve read.”—Alastair Fowler, University of Edinburgh

"Impressive in its range, lucidity, and intellectual rigor. . . . The volume moves deftly through the centuries and across boundaries of nation and genre. I have no doubt that students will benefit from the book, which is at once a useful work of reference and an invitation to browse."—Michael Levenson, University of Virginia

"Mikics''s Handbook contextualizes historically even as it conceptualizes—that is, in glossing a particular term, the author provides an historical account of its uses.  I intend to recommend it noisily."—John Hollander

‘If you have forgotten the form of a sestina or a ghazal, or can’t quite remember what vorticism was supposed to be, this book will do the trick: a confidently historicizing, impressively synoptic compilation of the major ideas and forms over the last 2,500 years or so of literature and criticism.’---The Guardian

David Mikics is professor of English at the University of Houston. He is the author of several books, including "Who""Was Jacques Derrida?," "The Limits of Moralizing, " and "The Romance of Individualism in Emerson and Nietzsche." He lives in Houston.
Loading...
or
Not Currently Available for Direct Purchase