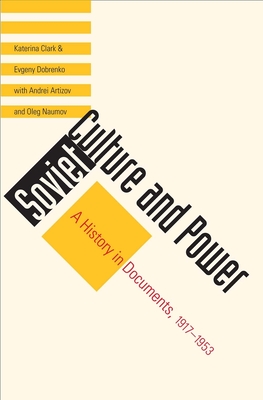 A history of Soviet repression of cultural and artistic life, based on remarkable archival documents never published in English before

Leaders of the Soviet Union, Stalin chief among them, well understood the power of art, and their response was to attempt to control and directit in every way possible. This book examines Soviet cultural politics from the Revolution to Stalin’s death in 1953. Drawing on a wealth of newly released documents from the archives of the former Soviet Union, the book provides remarkable insight on relations between Gorky, Pasternak, Babel, Meyerhold, Shostakovich, Eisenstein, and many other intellectuals, and the Soviet leadership. Stalin’s role in directing these relations, and his literary judgments and personal biases, will astonish many. The documents presented in this volume reflect the progression of Party control in the arts. They include decisions of the Politburo, Stalin’s correspondence with individual intellectuals, his responses to particular plays, novels, and movie scripts, petitions to leaders from intellectuals, and secret police reports on intellectuals under surveillance. Introductions, explanatory materials, and a biographical index accompany the documents.


Praise For Soviet Culture and Power: A History in Documents, 1917-1953 (Annals of Communism Series)…

"Clark and Dobrenko not only provide a careful and creatively organized selection of documents but also, in their commentary, a concise and incisive analysis of Soviet cultural history."—Carol Avins, Rutgers University

"To have these documents in one place, and accessible for students in English with detailed explanations and commentary, is nothing less than a small miracle. Beg, buy or borrow this wonderful book if you care about Russian culture."—Jeffrey Brooks, author of Thank You, Comrade Stalin! Soviet Public Culture from Revolution to Cold War

"This is a history of Soviet culture under Lenin and Stalin told in documents. The story unfolds in letters, public appeals, bureaucratic decisions, official orders, marginal jottings, police reports and memoranda, comments of censors, petitions, transcripts of meetings, and more. To have these documents in one place, and accessible for students in English with detailed explanations and commentary, is nothing less than a small miracle. Beg, buy or borrow this wonderful book if you care about Russian culture."—Jeffrey Brooks, author of Thank You, Comrade Stalin! Soviet Public Culture from Revolution to Cold War

"Joseph Stalin famously described Soviet writers as 'engineers of human souls.' This remarkable collection of documents, laden with comedy and sheer stupidity as well as calculated repression, chronicles the Bolshevik government's effort to control all cultural institutions and creative individuals. This is a story of compelling interest not only for Sovietologists but for anyone who wants to know what happens when a government treats culture as a long-term engineering project."—Susan Jacoby, author of Freethinkers: A History of American Secularism
— Susan Jacoby

"Throws a bright light on the party's torturous dealings with writers and on the inevitable conflict between art and propaganda. Perhaps the book's biggest surprise is its revelation of Stalin as literary critic. Despite his onerous responsibilities as party chief, dictator and head of state, no detail seems to have been too small for Stalin's eagle eye—a backhanded compliment if ever there was one to the awesome power of the written word."—Michael Scammell, author of Solzhenitsyn: A Biography

"Soviet Culture and Power is a groundbreaking work that provides access to significant archival materials for a population that might never have been able to read and analyze these documents."—Cynthia A. Ruder, Slavic and East European Journal
— Cynthia A. Ruder

Katerina Clark is professor of comparative literature and of Slavic languages and literatures, Yale University. She lives in Hamden, CT. Evgeny Dobrenko is professor in the Department of Russian and Slavic Studies, University of Nottingham. He lives in England.