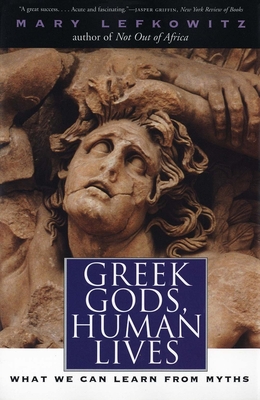 What We Can Learn from Myths

Why the Greek myths, more than those of any other culture, continue to captivate us

The mythology of ancient Greece has fascinated readers for two millennia and has formed the basis of Western civilization. The Greek gods are a perennial source of delight because they seem so much like us: in their rages, their love affairs, and their obsession with honor, the gods often appear all too human.

In Greek Gods, Human Lives, preeminent classicist Mary Lefkowitz reintroduces readers to the literature of ancient Greece. Lefkowitz demonstrates that these stories, although endlessly entertaining, are never frivolous. The Greek myths—as told by Homer, Ovid, Virgil, and many others—offer crucial lessons about human experience. Greek mythology makes vivid the fact that the gods control every aspect of the lives of mortals, but not in ways that modern audiences have properly understood. We can learn much from these myths, Lefkowitz shows, if we understand that they are stories about religious experience—about the meaning of divinity, the nature of justice, and the limitations of human knowledge. These myths spoke to ancient audiences and helped them to comprehend their world. With Mary Lefkowitz as an interpreter, these myths speak to us as well.

Praise For Greek Gods, Human Lives: What We Can Learn from Myths…


“[The] excellent scholar Mary Lefkowitz . . . briskly retells [some of the] classic myths, not only from Homer, Hesiod, and Greek tragedy, but also those to do with the voyage of the Argonauts and the adventures of Virgil’s Aeneas.”—Peter Green, Los Angeles Times Book Review

Mary Lefkowitz is Andrew W. Mellon Professor in the Humanities, Department of Classical Studies, Wellesley College. She has taught a highly popular introductory Greek mythology course for more than twenty-five years and has written extensively on ancient history and mythology. Among her books is Not Out of Africa: How Afrocentrism Became an Excuse to Teach Myth as History, which led to appearances on national radio talk shows and on 60 Minutes as well as to interviews in the Boston Globe and the Washington Post.