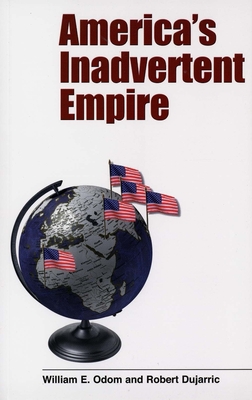 A thought-provoking and timely analysis of American power, with unexpected conclusions about the most serious threat we face in coming decades

The United States finds itself at the center of a historically unparalleled empire, one that is wealth-generating and voluntary rather than imperialistic, say the authors of this compelling book. William E. Odom and Robert Dujarric examine America’s unprecedented power within the international arenas of politics, economics, demographics, education, science, and culture. They argue persuasively that the major threat to this unique empire is ineffective U.S. leadership, not a rising rival power center.

America cannot simply behave as an ordinary sovereign state, Odom and Dujarric contend. They describe the responsibilities that accompany staggering power advantages and explain that resorting to unilateralism makes sense only when it becomes necessary to overcome paralysis in multilateral organizations. The authors also offer insights into the importance of liberal international institutions as a source of power, why international cooperation pays, and why spreading democracy often inhibits the spread of constitutional order. If the United States uses its own power constructively, the authors conclude, the American empire will flourish for a long time.

“At a time when explications of American strengths are often dismissed as ethnocentric and ‘triumphalist,’ this provocative book needs and deserves to be taken very seriously, even—or especially—by those who disagree. It is a valuable contribution to the public dialogue.”—Robert Jervis, Saltzman Institute of War and Peace Studies, Columbia University


“This book will be a significant intellectual marker in the ongoing debate about American national strategy in the post–Cold War era. Odom and Dujarric make a persuasive case that American primacy will last a long time.”—Stephen Peter Rosen, Olin Institute of Strategic Studies, Harvard University


“America’s Inadvertent Empire should help American decision makers to better understand the origin and growth of the assets they are privileged to manage and the tragedies for our country that could come from bad decisions based on inadequate comprehension.”—Senator Richard Lugar, U.S. Senate Foreign Relations Committee Chairman

Lt. Gen. William E. Odom (retired, U.S. Army) is a senior fellow at the Hudson Institute and professor (adjunct) at Yale University. Former director of the National Security Agency (1985–1988), he is also the author of The Collapse of the Soviet Military and Fixing Intelligence: For a More Secure America, both available in paperback from Yale University Press. Robert Dujarric is a Council on Foreign Relations Hitachi Fellow and a Senior Associate with the National Institute for Public Policy.
Loading...
or support indie stores by buying on