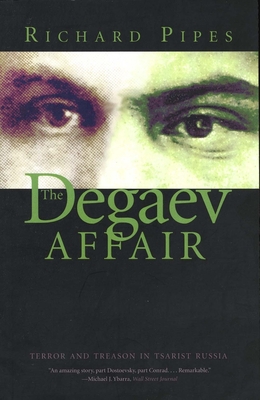 Terror and Treason in Tsarist Russia

A committed terrorist in Russia, an admired professor in America: the astounding story of Sergei Degaev’s double life, told in full detail for the first time

Sergei Degaev (1857–1921), a political terrorist in tsarist Russia, disappeared after participating in the assassination of the chief of Russia’s security organization in 1883. Those who later knew and admired the quietly brilliant Professor Alexander Pell at the University of South Dakota never guessed this was actually Degaev, who had triple-crossed friends and associates while entangled in the revolutionary movement of his homeland. This book is the first in any language to tell in detail the extraordinary story of one of the world’s most intriguing revolutionaries, his role in building and betraying the earliest political terrorist network, and his subsequent conventional academic career in America.

The well-known historian Richard Pipes uses previously unexplored Russian archives to draw a brilliant psychological, political, and sociological portrait of Degaev. Pipes pursues his protagonist on a twisting journey of changing loyalties and fateful collaborations within the network that provided the model for all modern terrorist organizations. A cunning conspirator, Degaev went on to reinvent himself in the United States as a beloved mathematics professor. Either of his lives would be considered remarkable; that Degaev lived both is nothing short of amazing.

Praise For The Degaev Affair: Terror and Treason in Tsarist Russia…


“One of the most distinguished historians of Russia . . . [gives] us a real-life thriller that is also a cautionary tale rich with insight into depths of the human psyche.”—David Pryce-Jones, Commentary

Richard Pipes is Baird Professor of History, Emeritus, Harvard University. He is the author or editor of twenty-three books, among them Communism: A History, Russia Under the Old Regime, The Russian Revolution, and Property and Freedom.
Loading...
or support indie stores by buying on