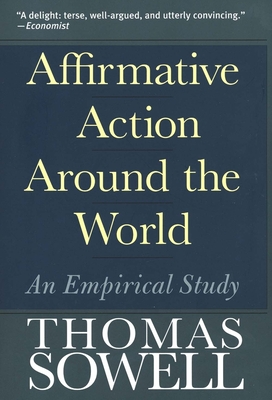 Affirmative Action Around the World

In this important book, an eminent authority presents a new perspective on affirmative action, investigating its actual consequences in the United States and in other countries where it has been in effect. Evaluating his empirical data, Thomas Sowell concludes that race preference programs worldwide have not met expectations and have often produced the opposite of what was originally intended.

Praise For Affirmative Action Around the World: An Empirical Study…


“Among contemporary economists and social theorists, one of the most prolific, intellectually independent, and iconoclastic is Thomas Sowell. . . . Enormously learned, wonderfully clear-headed, he sees reality as it is, and flinches at no truth. . . . Sowell’s presentation of the data is instructive and illuminating—and disturbing.”—Carl Cohen, Commentary

Thomas Sowell is the Rose and Milton Friedman Senior Fellow in Public Policy at the Hoover Institution, Stanford University. The author of numerous books, he also writes a nationally syndicated column that appears in more than 150 newspapers and contributes regularly to Forbes magazine. He has taught economics at various colleges and universities, including Cornell, Amherst, and the University of California-Los Angeles.
Loading...
or
Not Currently Available for Direct Purchase