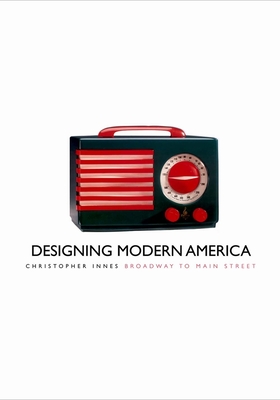 The story of two legendary designers who made “modern America”

From the 1920s through the 1950s, two individuals, Joseph Urban and Norman Bel Geddes, did more, by far, to create the image of “America” and make it synonymous with modernity than any of their contemporaries. Urban and Bel Geddes were leading Broadway stage designers and directors who turned their prodigious talents to other projects, becoming mavericks first in industrial design and then in commercial design, fashion, architecture, and more. The two men gave shape to the most quintessential symbols of the modern American lifestyle, including movies, cars, department stores, and nightclubs, along with private homes, kitchens, stoves, fridges, magazines, and numerous household furnishings.

Illustrated with more than 130 photographs of their influential designs, this book tells the engrossing story of Urban and Bel Geddes. Christopher Innes shows how these two men with a background in theater lent dramatic flair to everything they designed and how this theatricality gave the distinctive modernity they created such wide appeal. If the American lifestyle has been much imitated across the globe over the past fifty years, says Innes, it is due in large measure to the designs of Urban and Bel Geddes. Together they were responsible for creating what has been called the “Golden Age” of American culture.

"Original and innovative. I know of no other book that brings Urban and Bel Geddes together to demonstrate the specificity of their unique and quite astonishing accomplishments, their influence and impact on so many aspects of American life."—Don B. Wilmeth, Asa Messer Professor Emeritus, Brown University, and editor, Cambridge Guide to American Theatre
— Don B. Wilmeth

"Innes shows the unsuspected extent to which a magical theatrical world of a thousand colors and million shapes—each of which had a special job to do in somebody's idea of the ensemble—has become the world in which we live every day."—Joseph Roach, Charles C. and Dorothea S. Dilley Professor of Theater, Yale University

"Even aficionados of modern American design will be astonished by the prodigious talents and ambitions of Joseph Urban and Norman Bel Geddes, as chronicled by author Christopher Innes in Designing Modern America: Broadway to Main Street. This fascinating account traces the connections between Urban's and Bel Geddes's theatrical productions on Broadway and their iconic consumer products that defined the look of  'The American Century' for much of the western world. This story of their less-known efforts to create a holistic modernism that encompassed the entire environment, from model kitchens to model cities, with fashion, cars, movies, household furnishings, world's fairs, low-cost housing, and factories in between, represents a significant contribution to our understanding of these two pioneer industrial designers and their role in the history of American design."—Natalie Shivers, co-author, L.A.'s Early Moderns: Art/Architecture/Photography

“To trace the genesis and influence of Urban and Bel Geddes on American culture is to see the evolution of twentieth-century American design and its influence on the world. Innes’s book is a revelation.”—Thomas F. Staley, University of Texas at Austin