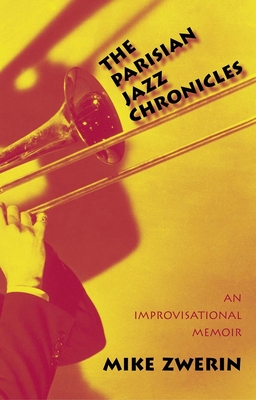 In his Beat-like jaunt through the Parisian and European jazz scene, Mike Zwerin is not unlike Jack Kerouac, Mezz Mezzrow, or Hunter S. Thompson—writers to whom, for different reasons, he owes some allegiance. What makes him special is his devotion to the troubled musicians he idolizes, and a passion for music that is blessedly contagious.

Many jazz fans will know Mike Zwerin for his witty, irreverent, and undeniably hip music reviews and articles in the International Herald Tribune that have entertained us for decades. Based in Paris, or, rather, stuck there, as Zwerin likes to say, he has been a music critic for the Trib since 1979. Zwerin also had a distinguished career as a trombonist. When he was just eighteen years old, he was invited by Miles Davis to play alongside Gerry Mulligan, John Lewis, and Max Roach in the band that was immortalized as The Birth of the Cool.

The Parisian Jazz Chronicles offers an engaging personal account of the jazz scene in Paris in the 1980s and 1990s. Zwerin writes lovingly but unsparingly about figures he knew and interviewed— such as Dexter Gordon, Freddy Heineken, Miles Davis, Bob Dylan, Chet Baker, Wayne Shorter, and Melvin Van Peebles. Against this background, Zwerin tells about his own life—split allegiances to journalism and music, and to America and France, his solitary battle for sobriety, a failing marriage, and fatherhood.

Mike Zwerin has been a music columnist for the International Herald Tribune since 1979, and, since 2005, for Bloomberg News. A world-class trombonist, he has played with Miles Davis, Earl Hines, Eric Dolphy, and other jazz legends.


Praise For The Parisian Jazz Chronicles: An Improvisational Memoir…

"Jazz musicians are by nature secret agents, meaning as they travel and perform throughout the world, they observe and take notes . . . all to be digested and used for source material in their art. Zwerin does just that, examining everything from language to the music and all of life in between. His observations on the differences between French and American culture warrant the price of admission, not to mention his insights into Bob Dylan, Miles Davis, and other notables. Zwerin takes you for a ride that is informative, entertaining, and as hip as it gets."—David Liebman, jazz saxophonist

“Mike Zwerin’s insider’s take on the musician’s life follows Miles Davis in knowing what notes not to play: he sees everything, and says just enough. Zwerin has written inimitably for decades, and this book raises his work to new expressive heights. The clear-eyed, bleakly honest closing chapters lead to an earned, effervescent, ultra-Parisian turnaround and climax a stylish ramble through the obliquities of hip intercontinental life. A masterly take on cosmopolitan culture in our time.”—Rafi Zabor, author of The Bear Comes Home and I,Wabenzi

“Mike has lived it and played it with the best. His transatlantic home has a rather beautiful and complicated relationship with jazz. Let this great journalist be your guide.”—Robert Wyatt, musician