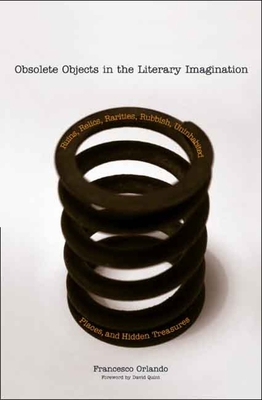 Obsolete Objects in the Literary Imagination

Translated here into English for the first time is a monumental work of literary history and criticism comparable in scope and achievement to Eric Auerbach’s Mimesis. Italian critic Francesco Orlando explores Western literature’s obsession with outmoded and nonfunctional objects (ruins, obsolete machinery, broken things, trash, etc.). Combining the insights of psychoanalysis and literary-political history, Orlando traces this obsession to a turning point in history, at the end of eighteenth-century industrialization, when the functional becomes the dominant value of Western culture.
Roaming through every genre and much of the history of Western literature, the author identifies distinct categories into which obsolete images can be classified and provides myriad examples. The function of literature, he concludes, is to remind us of what we have lost and what we are losing as we rush toward the future.

"Obsolete Objects in the Literary Imagination is one of a kind: already a classic in the field of comparative literature, its examples and case studies, analyzed with rare critical intelligence and subtlety, range across nearly every European language and literary tradition."—David Quint, from the foreword

“With subtle, teacherly guidance, Orlando takes the reader by the hand from the first page on and leads him step by step along his extraordinary intellectual adventure with the twofold result of smoothing out for him quite a few bumps in the road and co-involving him in the pleasure (and sometimes even in the pride) of discovery.”—Giovanni Bogliolo, La Stampa

"A work which stands confidently alongside some of the 'classics' of twentieth century criticism (from Curtius to Praz and Auerbach)." —Giulio Ferroni, L’Unita

Francesco Orlando is professor of theory of literature at the University of Pisa and is widely regarded as one of Europe’s foremost literary critics. Gabriel Pihas is assistant professor, European College of Liberal Arts, Berlin. Daniel Seidel is a freelance translator living in Brooklyn, NY. Alessandra Grego is adjunct professor of English literature, John Cabot University of Rome.
Loading...
or support indie stores by buying on