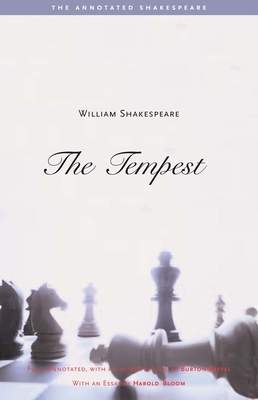 The Tempest (The Annotated Shakespeare)

Shakespeare's valedictory play is also one of his most poetical and magical. The story involves the spirit Ariel, the savage Caliban, and Prospero, the banished Duke of Milan, now a wizard living on a remote island who uses his magic to shipwreck a party of ex-compatriots.

Praise For The Tempest (The Annotated Shakespeare)…

"Two of the bard’s heavy dramas join Yale’s wonderful Annotated Shakespeare series. Along with a heavily annotated text, each volume includes a scholarly introduction plus notes on the annotations. All that for the price of a Happy Meal: how can you go wrong?"—Library Journal (refers to Henry the Fourth, Part 1 & The Tempest)

Burton Raffel is Distinguished Professor of Arts and Humanities Emeritus and professor of English emeritus, University of Louisiana at Lafayette. Among his many edited and translated publications are Poems and Prose from the Old English, Cligès, Lancelot, Perceval, Erec and Enide, and Yvain, all published by Yale University Press. Harold Bloom, Sterling Professor of Humanities at Yale University and Berg Professor of English at New York University, is the author of many books, including The Western Canon, Shakespeare: The Invention of the Human, and Where Shall Wisdom Be Found?
Loading...
or
Not Currently Available for Direct Purchase