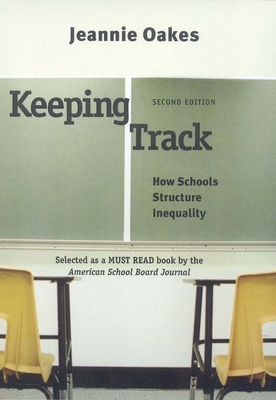 Selected by the American School Board Journal as a “Must Read” book when it was first published and named one of 60 “Books of the Century” by the University of South Carolina Museum of Education for its influence on American education, this provocative, carefully documented work shows how tracking—the system of grouping students for instruction on the basis of ability—reflects the class and racial inequalities of American society and helps to perpetuate them. For this new edition, Jeannie Oakes has added a new Preface and a new final chapter in which she discusses the “tracking wars” of the last twenty years, wars in which Keeping Track has played a central role.
From reviews of the first edition:
“Should be read by anyone who wishes to improve schools.”—M. Donald Thomas, American School Board Journal
“[This] engaging [book] . . . has had an influence on educational thought and policy that few works of social science ever achieve.”—Tom Loveless in The Tracking Wars
“Should be read by teachers, administrators, school board members, and parents.”—Georgia Lewis, Childhood Education
“Valuable. . . . No one interested in the topic can afford not to attend to it.”—Kenneth A. Strike, Teachers College Record

Jeannie Oakes is Presidential Professor and Director of the Institute for Democracy Education and Access at University of California, Los Angeles.

"Keeping Track should be read by teachers, administrators, school board members and parents—and not only parents of low income, minority or failing students.  Educational practices that are harmful to some of us are ultimately harmful to all of us."—Georgia Lewis, Childhood Education

"Not only a first-rate research analysis of a fundamental educational problem, but also a critically important depiction of our contemporary educational system."—Meyer Weinberg, Educational Studies

"A well-documented treatise designed to support the Procrustean contention that the school must be the great equalizer, not the predeterminer of individual differences."—Library Journal

"Keeping Track is an extensively researched and perceptively reasoned censure of widely accepted educational practices.  The questions it raises will undoubtedly heighten the debate over the troubling situation in American schools, though the solutions it puts forward may well be long in coming."—Dona Kesselman, Revue Franciase d'etudes Americanines

"Oakes's book surpasses previous work on tracking by looking not simply at where and how students are assigned to tracks but at what happens to them once they reach their classrooms. . . . I found Oakes's work to be illuminating and well worth reading. By peering inside tracked classrooms, Oakes goes beyond previous research in the field, and her findings about classroom life are most revealing."—Adam Gamoran, American Journal of Education

"[This] book describes with precision the various forms of academic and nonacademic differentiation practices in junior and senior high schools [and] sustains a coherent and forceful indictment of tracking, along with reasoned arguments for reform."—Barbara Heyns, American Journal of Sociology

"Jeannie Oakes has written an important book, one that's sure to create controversy. And Keeping Track: How Schools Structure Inequality—even if you appreciate its message—will disturb you. . . . Keeping Track isn't a comfortable book to read. Nevertheless, it's one that should be read by anyone who wishes to improve schools. It's a fine companion to the effective schools movement, and its contents are especially important during a time when so many reforms are being examined."—M. Donald Thomas, American School Board Journal (Selected as one of the ten "MUST READ" books of 1985)

"Oakes has an important message for secondary education and comes across as sincere and convincing in arguing her main thesis—that tracking is one of the great unintentional malpractices of American education. This book is recommended for all secondary educators, graduate students, and social-science researchers. It is appropriate reading for upper-division undergraduates."—Choice

"[A] well-written book. . . . A model of the use of triangulation. . . . Both critics and supporters if tracking will find Keeping Track a stimulating book. Finally, this book will force those who have no position on tracking to adopt a position."—Mark Oromaner, Contemporary Sociology

"An incisive, relentless and highly readable attack on the practice of tracking."—Carolyn Jurkowitz, Educational Leadership

"In this important work about the school phenomenon of tracking students, the author asserts that the practice establishes and promotes inequality in our schools."—Harvard Educational Review

"Oakes' book comes at an important time in our history, given the scope of debate and reform activity surrounding American education today."—Henry A. Giroux and Peter McLaren, Metropolitan Education

"Jeannie Oakes's new book arrives just in time to let us know what tracking has actually accomplished in American education and what its impact has been on students and society. Oakes demonstrates, with substantial evidence, that students have radically different and unequal schooling experiences depending on their race and social class. . . . Much of the difference in school outcomes, she argues, can be explained by what happens to students IN schools, and much of that difference rests on tracking. This is not a new argument, but Keeping Track is the most thorough effort I've yet seen to document it. One new feature of Oakes's argument is that she has directed her attention to tracking in high schools. . . . At the heart of Oakes's work is a careful documentation of the way in which students are sorted and what goes on at each level."—Deborah Meier, Nation

"This is a valuable book. . . . It makes a substantial contribution to the literature.  No one interested in the topic can afford not to attend to it."—Kenneth A. Strike, Teachers College Record

"In the twenty years since the first edition of Keeping Track, Jeannie Oakes reveals a stubborn reliance on outmoded definitions of intelligence, and thusly, ‘merit.’ These conceptions tragically result in tracking structures and practices that assure the ascendancy of only a privileged few. Oakes’ revised edition grips us yet again with her forcefulness of word, evidence, and logic. To her credit, she got it right twenty years ago and she remains on target today!"—Angela Valenzuela, University of Texas at Austin

"It has long been recognized that schools play an important role in reproducing patterns of inequality in American society. In Keeping Track,we learn how this occurs. Through a compelling analysis of the sorting practice now commonly referred to as tracking, Dr. Oakes shows why schools are too often not the source of equal opportunity that we hope them to be."—Pedro Noguera, Ph.D., Professor, Steinhardt School of Education New York University

"This book sheds a disturbing new light on an already troubling situation.  All who are concerned about the present and future of our nation's schools would do well to ponder its message."—Philip Jackson, University of Chicago