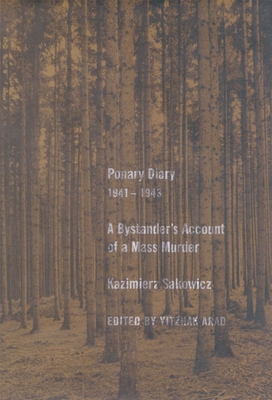 A chilling wartime diary of the destruction of the Lithuanian/Polish Jews, recorded by a non-Jew

About sixty thousand Jews from Wilno (Vilnius, Jewish Vilna) and surrounding townships in present-day Lithuania were murdered by the Nazis and their Lithuanian collaborators in huge pits on the outskirts of Ponary. Over a period of several years, Kazimierz Sakowicz, a Polish journalist who lived in the village of Ponary, was an eyewitness to the murder of these Jews as well as to the murders of thousands of non-Jews on an almost daily basis. He chronicled these events in a diary that he kept at great personal risk.

Written as a simple account of what Sakowicz witnessed, the diary is devoid of personal involvement or identification with the victims. It is thus a unique document: testimony from a bystander, an “objective” observer without an emotional or a political agenda, to the extermination of the Jews of the city known as “the Jerusalem of Lithuania.”

Sakowicz did not survive the war, but much of his diary did. Painstakingly pieced together by Rahel Margolis from scraps of paper hidden in various locations, the diary was published in Polish in 1999. It is here published in English for the first time, extensively annotated by Yitzhak Arad to guide readers through the events at Ponary.

"This remarkable diary, written by a sympathetic Polish observer, gives a graphic and harrowing account of the mass murder of between fifty and sixty thousand Lithuanian Jews in the forest of Ponary just outside Vilna. It is a unique contribution to our understanding of the Holocaust."—Antony Polonsky, Brandeis University

“[The Ponary Diary] is a chilling account of man’s inhumanity to man.”—Sheldon Kirshner, Canadian Jewish News

YITZHAK ARAD is the author of Ghetto in Flames: The Struggle and Destruction of the Jews in Vilna and former chairman of the Directorate of Yad Vashem.