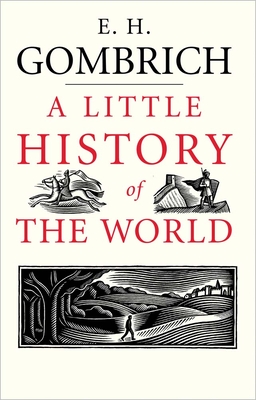 The international bestseller: E. H. Gombrich’s sweeping history of the world, for the curious of all ages

“All stories begin with ‘Once upon a time.’ And that’s just what this story is all about: what happened, once upon a time.” So begins A Little History of the World, an engaging and lively book written for readers both young and old. Rather than focusing on dry facts and dates, E. H. Gombrich vividly brings the full span of human experience on Earth to life, from the stone age to the atomic age. He paints a colorful picture of wars and conquests; of grand works of art; of the advances and limitations of science; of remarkable people and remarkable events, from Confucius to Catherine the Great to Winston Churchill, and from the invention of art to the destruction of the Berlin Wall.

For adults seeking a single-volume overview of world history, for students in search of a quick refresher course, or for families to read and learn from together, Gombrich’s Little History enchants and educates.

"A remarkable book, written in an amiable, conversational style, effortlessly explaining, without condescension, difficult matters like the achievements of Charlemagne, the monetary system of medieval Europe and the ideas of the Enlightenment. . . . This resurrected history deserves reading for all its delights."—Edward Rothstein, New York Times

"In simple, vivid prose, Gombrich surveys the human past from pre-history to his own time. . . . Lucky children will have this book read to them. Intelligent adults will read it for themselves and regain contact with the spirit of European humanism at its best."—Anthony Grafton, Wall Street Journal

"Gombrich knows precisely how to converse with his audience, intelligent children between nine and thirteen. He uses powerful imagery to convey the sheer length of time that separates us from the dinosaurs."—Andrew Roberts, FT Magazine

"The book is intellectually valuable, and unusual; rather than breaking history into eras or artificial categories. . . . Gombrich contextualizes them all and gives the vast unfolding of the Western world one wise, simple narrative. . . . For adults, it is full of delightful reminders as well as forgotten or never-known tidbits. As for younger readers . . . [the book] is a treasure for them."—Katie Haegele, Philadelphia Inquirer

"So sharp was Gombrich's intelligence and so lively his pen that it can be appreciated as much as literature as history. . . . There is not one of the 39 short chapters that is not enlivened by a sharp insight or arresting image."—Tim Blanning, Sunday Telegraph

". . . a wonderful counterbalance to our entertaining cartoon kinder-staple, the Horrible Histories. . . . Gombrich proves that the search for a grander truth can for younger readers, be as engrossing as Horrible's farts, gore and ghouls."—Bettany Hughes, Times

"His enthusiasm for his subject is irresistible. . . . With Gombrich's Little History, at last available in English, there will be many generations of future historians who will attribute to it their lifelong passion for history - and for truth."—Lisa Jardine, Times

"I am going to buy ten copies of this book and give it to my ten favourite children . . . this is a book which teaches what it is to be civilised by its very tone, which is one of gentleness, curiosity and erudition."—A.N. Wilson, Times Literary Supplement

"Lucky children will have this book read to them. Intelligent adults will read it for themselves and regain contact with the spirit of European humanism at its best."—Wall Street Journal (Europe)

"This is an unusual work for Yale: a children’s history originally published 70 years ago. But it is a work one can quickly come to love. . . . Using vivid imagery, storytelling and sly humor, [Gombrich] brings history to life in a way that adults as well as children can appreciate. The book displays a breadth of knowledge."—Publishers Weekly (starred review)

"The true fairy tale of the evolution of mankind."—Die Zeit

"This is the first English translation of a book written in 1935 in German and translated into 18 languages. Thirty years later, a second German edition was published with a new final chapter. In 40 brief chapters, Gombrich relates the history of humankind from the Stone Age through World War II. In between are historic accounts of such topics as cave people and their inventions (including speech), ancient life along the Nile and in Mesopotamia and Greece, the growth of religion, the Dark Ages, the age of chivalry, the New World, and the Thirty Years' War. Much of this history is told through concise sketches of such figures as Confucius, Alexander the Great, Hannibal, Jesus Christ, Charlemagne, Leonardo da Vinci, Napoleon, and Columbus. Gombrich was asked to write a history geared to younger readers, so the book is filled with innumerable dates and facts, yet it is one to be read by adults. With 41 black-and-white woodcut illustrations and nine maps, it is a timeless and engaging narrative of the human race."—Booklist

"A masterpiece of nonfiction writing for children. It is a wry and charming book, perfectly suited to the capacities of a 10-year-old, but also remarkably free of condescension. An adult can read it with pleasure. And, indeed, with instruction."—Scott McLemee, Newsday

"[A] lively and involving history. . . . Superbly designed and freshly illustrated, this is a book to be savored and collected. . . . This is a text dominated not by dates and facts, but by the sweep of mankind’s experience across the centuries, a guide to humanity’s achievements and an acute witness to its frailties. The product of a generous and humane sensibility, this timeless account makes intelligible the full span of human history."—Artdaily

"A timeless and engaging narrative of the human race."—Choice

"Includes insightful looks into the world of art and science . . . readers of virtually any age can enjoy it."—Dennis Lythgoe, deseretnews.com

"The author's voice is conversational, and Gombrich brings clarity to broad movements in history while focusing on rich real-life characters. You'll be reaching for it to help your children with their history assignments when traditional textbooks leave them confused and overwhelmed."—Fort WorthStar-Telegram

"To round out our word feast for young minds, we've picked a nonfiction work called A Little History of the World, a 300-page tome that has been wildly popular across the globe since it was first published in 1935 but has just been translated into English. . . . [An] excellent choice for out-loud family reading."—Catherine Mallette, Fort WorthStar-Telegram

"An intriguingly brisk journey for anyone looking to (re-)enter the world of history, or a realm of events and facts larger than ourselves."—David Podgurski, Greenwich (CT) Times

"Imagine Goethe giving up the role of sage long enough to become a children’s author and you will have a reasonably good idea of the book’s content . . . As for the style . . . well, that is something even more remarkable. The tone is wry, at times, without ever being jokey—a kind of light seriousness that is very respectful of its young audience . . . Gombrich commanded a really humbling degree of erudition, but always with a certain generosity towards his audience. That combination is very much in evidence throughout."—Scott McLemee, Inside Higher Ed

"A lovely, lively historical survey that takes in Neanderthals, Hohenzollerns and just about everything in between . . . Conversational, sometimes playful . . . A fine conception and summarizing of the world's checkered past for young and old."—Kirkus Reviews (starred review)

"Presented in a story-like fashion, and no one has done it better than E.H. Gombrich."—Kevin Walker, Tampa Bay Online

"In perusing this little gem, it’s often easy to forget that one is reading a children’s book. . . . Gombrich’s sweeping narrative and keen insights can keep that older reader as enthralled as the younger. . . . His history, like his art history, is a story, which is what makes it so engaging to the young and old alike. . . . It is Gombrich’s outlook that makes this book so special. The eminent historian has retained a child-like sense of wonder about the world that too many people lose as they grow older. His ability to communicate just how truly astonishing the world is—he often stops in amazement when he recounts a story like that of Alexander the Great—carries readers swiftly along with him."—Kelly Jane Torrance, The American Enterprise

". . . should delight readers of all ages, even if Gombrich warns, 'The history of the world is not a pretty poem.'"—Bob Minzesheimer, USA Today


Named a Favorite Book of 2005 by the Los Angeles Times


"A brilliant piece of narrative, splendidly organised, told with an energy and confidence that are enormously attractive, and suffused with all the humanity and generosity of spirit that Gombrich's thousands of admirers came to cherish during his long and richly productive life. It's a wonderful surprise: irresistible, in fact."—Philip Pullman


"Imagine the full story of human habitation on our planet being told in such flowing prose that you want to read it out loud. If you can't imagine that, read A Little History of the World and experience it!"—Patricia S. Schroeder, President and CEO of the Association of American Publishers and Former U.S. Representative from Colorado

Among E. H. Gombrich’s many writings are the international bestsellers The Story of Art and Art and Illusion. He was director of the Warburg Institute of the University of London from 1959 to 1976.