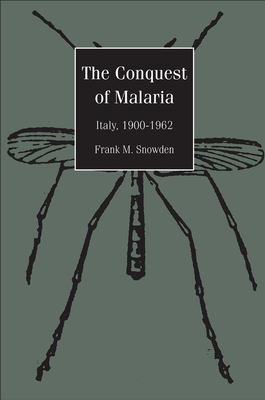 The Conquest of Malaria

At the outset of the twentieth century, malaria was Italy’s major public health problem. It was the cause of low productivity, poverty, and economic backwardness, while it also stunted literacy, limited political participation, and undermined the army. In this book Frank Snowden recounts how Italy became the world center for the development of malariology as a medical discipline and launched the first national campaign to eradicate the disease.

Snowden traces the early advances, the setbacks of world wars and Fascist dictatorship, and the final victory against malaria after World War II. He shows how the medical and teaching professions helped educate people in their own self-defense and in the process expanded trade unionism, women’s consciousness, and civil liberties. He also discusses the antimalarial effort under Mussolini’s regime and reveals the shocking details of the German army’s intentional release of malaria among Italian civilians—the first and only known example of bioterror in twentieth-century Europe. Comprehensive and enlightening, this history offers important lessons for today’s global malaria emergency.

"Snowden's study...is a remarkable piece of historical work. Original, crystal-clear, analytical and passionate, Snowden...takes us to areas historians have rarely visited before. ... This magnificent study, beautifully written and impeccably documented, deserves an audience beyond specialists in history, or in Italy." - John Foot, The Guardian

The Guardian Book of the Week - Saturday 8th April 2006

"In The Conquest of Malaria, Snowden traces the early advances, the setbacks of world wars and Fascist dictatorship, and the final victory against malaria after World War II. . . . Comprehensive and enlightening, The Conquest of Malaria also offers important lessons of today's global malaria emergency."—Italian Tribune

“Frank Snowden has drawn on neglected Italian sources to produce a detailed account of the protracted struggle to bring malaria under control in Italy. The Conquest of Malaria is an important contribution to the malaria literature. … [An] excellent book…” - Brian Greenwood, Nature

"Frank Snowdon's excellent book provides an insightful and illuminating account of how one nation—Italy—undertook the first national campaign to eradicate this debilitating disease. More importantly, The Conquest of Malaria serves as a timely warning to those who advocate simple technological quick fixes to what was (and still is) a complex environmental, social, economic, and political problem."—Andrea Rusnock, Isis

"Snowden's careful study elucidates the eradication [of malaria] well, and the Italian experience offers much to ponder as we face malaria in the present century."—W.F. Bynum, Journal of the American Medical Association

Winner of the 2006 Helen and Howard R. Marraro Prize given by the American Historical Association

Winner of the 2008 Welch Medal, given by the American Association for the History of Medicine.

"With this book, Snowden achieves two difficult goals. He demonstrates how important malaria was to the political and social history of Italy to the mid-twentieth century, an aspect of the country’s course underappreciated by its historians. Perhaps more importantly, he has crafted a marvelously detailed case study in the control of malaria, that shows how closely intertwined are the environmental, medical, social and political features of a landscape that nurtures the disease. Whether describing the temporary Fascist victory over malaria in the Pontine Marshes or the deliberate creation of malarial epidemics by retreating Nazis, Snowden’s lively account convinces the reader that as malaria goes, so goes Italy. This is a first rate, valuable book that belongs on the shelf of historian and malariologist alike."—Dr. Margaret Humphreys, Professor of History, Duke University

"Frank Snowden's research on Italy's battle against malaria combines a mastery of the scientific literature with a profound understanding of the laws of motion of Italian society and politics."—John Dickie, author of Cosa Nostra: A History of the Italian Mafia

“Frank Snowden’s study of the scourge and final eradication of malaria in Italy is a masterpiece. Rigorous, passionate, and highly original, it deserves a wide audience amongst historians and students.”—John Foot, reader in Modern Italian History, Department of Italian, University College London

"A highly original and authoritative reconstruction of Italy's historic and sometimes tragic battle with malaria; in its historical sweep, this book brilliantly conceptualizes disease within a political landscape that includes socialists, liberals, feminists, and fascists. A model for research on the history of medicine."—Mary Gibson, City University of New York

Frank M. Snowden is professor of history at Yale University.
Loading...
or
Not Currently Available for Direct Purchase