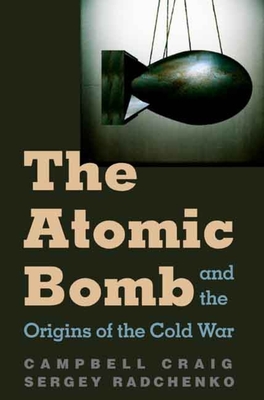 The Atomic Bomb and the Origins of the Cold War

After a devastating world war, culminating in the obliteration of Hiroshima and Nagasaki, it was clear that the United States and the Soviet Union had to establish a cooperative order if the planet was to escape an atomic World War III.

In this provocative study, Campbell Craig and Sergey Radchenko show how the atomic bomb pushed the United States and the Soviet Union not toward cooperation but toward deep bipolar confrontation. Joseph Stalin, sure that the Americans meant to deploy their new weapon against Russia and defeat socialism, would stop at nothing to build his own bomb. Harry Truman, initially willing to consider cooperation, discovered that its pursuit would mean political suicide, especially when news of Soviet atomic spies reached the public. Both superpowers, moreover, discerned a new reality of the atomic age: now, cooperation must be total. The dangers posed by the bomb meant that intermediate measures of international cooperation would protect no one. Yet no two nations in history were less prepared to pursue total cooperation than were the United States and the Soviet Union. The logic of the bomb pointed them toward immediate Cold War.

"This is a sprightly and well-argued book that should be read by a wide audience. The complicated history of how the bomb influenced the start of the war has never been explored so well."—Lloyd Gardner, Rutgers University
— Lloyd Gardner

“An outstanding new interpretation of the origins of the Cold War that gives equal weight to American and Soviet perspectives on the conflict that shaped the contemporary world. Its central thesis—that the atomic bomb made the Cold War inevitable—is sure to provoke considerable controversy.”—Geoffrey Roberts, author of Stalin’s Wars: From World War to Cold War, 1939-1953
— Geoffrey Roberts

“In a signal contribution, Craig and Radchenko bring together the key aspects of the role of the atom bomb in starting the Cold War, including its development, use, and the proposals for its control. With original research and keen judgment, the authors bring out new factors, such as the impact of the discovery of Soviet espionage on the development of the Baruch Plan, and integrate multiple elements to give us a much fuller picture of this crucial topic.”—Robert Jervis, Columbia University

"Campbell Craig and Sergey Radchenko have produced a fascinating account of the origins of the Cold War.  Taking advantage of new documentation (especially on the Soviet side), they provide strong evidence that the dangers inherent in the atomic bomb itself—independently of ideological clashes or even run of the mill great power competition—played a pivotal, perhaps unavoidable role in creating the American-Soviet confrontation. This history speaks volumes about the underlying causes of suspicion and confrontation associated with nuclear proliferation today and the difficulties of reducing such tensions." —Robert A. Pape, University of Chicago
— Robert A. Pape

Campbell Craig is professor of international relations at the University of Southampton. He lives in Salisbury, England. Sergey Radchenko is a tutorial follow in international history at the London School of Economics. He lives in London.