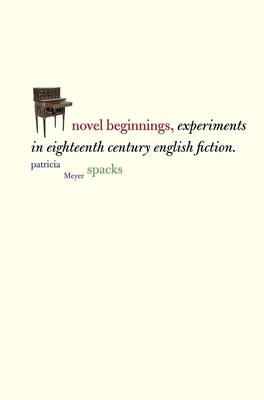 A celebratory history and appreciation of the varied, wildly experimental nature of fiction in eighteenth-century England

In this study intended for general readers, eminent critic Patricia Meyer Spacks provides a fresh, engaging account of the early history of the English novel. Novel Beginnings departs from the traditional, narrow focus on the development of the realistic novel to emphasize the many kinds of experimentation that marked the genre in the eighteenth century before its conventions were firmly established in the nineteenth. Treating well-known works like Tom Jones and Tristram Shandy in conjunction with less familiar texts such as Sarah Fielding’s The Cry (a kind of hybrid novel and play) and Jane Barker’s A Patch-Work Screen for the Ladies (a novel of adventure replete with sentimental verse and numerous subnarratives), the book evokes the excitement of a multifaceted and unpredictable process of growth and change.

Investigating fiction throughout the 1700s, Spacks delineates the individuality of specific texts while suggesting connections among novels. She sketches a wide range of forms and themes, including Providential narratives, psychological thrillers, romans à clef, sentimental parables, political allegories, Gothic romances, and many others. These multiple narrative experiments show the impossibility of thinking of eighteenth-century fiction simply as a precursor to the nineteenth-century novel, Spacks shows. Instead, the vast variety of engagements with the problems of creating fiction demonstrates that literary history—by no means inexorable—might have taken quite a different course.

Patricia Meyer Spacks is Edgar Shannon Professor of English Emerita, University of Virginia. A recognized authority on eighteenth-century fiction and culture, she is the author of numerous books, including Boredom: The Literary History of a State of Mind.
Loading...
or support indie stores by buying on