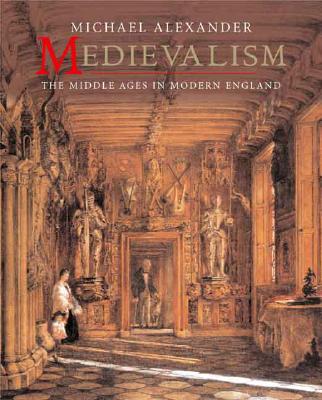 The Middle Ages in Modern England

The style of the medieval period, which flows through the bloodstream of western culture, was vigorously re-established in post-Enlightenment England. This one-volume history of the Medieval Revival is the first coherent account of it, especially those aspects that are expressed and reflected in literature. The book focuses on the period 1760 to 1971, with an Epilogue on the reverberations of medievalism in the present day.
The rebuilding of the Palace of Westminster, after its destruction by fire in 1834, re-established Gothic as the national style. But medieval imitation manifests itself wherever one cares to look: in literature, architecture, the applied arts, religion, politics, and even Hollywood. In this skilled dissection of the components of this pervasive cultural movement, Michael Alexander rejects the idea that medievalism was confined to the Victorian period, and overturns the suspicion that it is by its nature escapist.

Michael Alexander held the Chair of English at St. Andrews University. His many books include A History of English Literature and Reading Shakespeare.

Praise For Medievalism: The Middle Ages in Modern England…

"Alexander has written a very useful introduction for undergraduates and the general reader. The mass of information is firmly marshalled, lucidly narrated, and salted with a pleasantly wry wit. It is handsomely produced, lavishly illustrated yet moderately priced."—Roger Simpson, Arthuriana
-Roger Simpson

"[A] sweeping survey of architecture, art, and especially literature that pauses long enough over specific artists and authors. . . . Medievalism . . . will benefit any scholar wanting to understand how a long-ago age resurfaced in British culture a couple of centuries ago."— Eric Daffron, Sixteenth Century Journal
-Eric Daffron