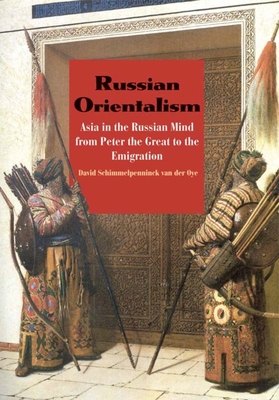 The West has been accused of seeing the East in a hostile and deprecatory light, as the legacy of nineteenth-century European imperialism. In this highly original and controversial book, David Schimmelpenninck van der Oye examines Russian thinking about the Orient before the Revolution of 1917. Exploring the writings, poetry, and art of representative individuals including Catherine the Great, Alexander Pushkin, Alexander Borodin, and leading orientologists, Schimmelpenninck argues that the Russian Empire’s bi-continental geography, its ambivalent relationship with the rest of Europe, and the complicated nature of its encounter with Asia have all resulted in a variegated and often surprisingly sympathetic understanding of the East among its people.

David Schimmelpenninck van der Oye is professor of Russian history at Brock University in Ontario. He is the author of Toward the Rising Sun: Ideologies of Empire and the Path to War with Japan.

Praise For Russian Orientalism: Asia in the Russian Mind from Peter the Great to the Emigration…

"Set against the controversies of Edward Said's book on Orientalism, this book brilliantly reveals how one Eastern people looked at its own Eastern fellow subjects and at the Eastern world beyond its borders."—Richard Stites, author of Serfdom, Society and The Arts in Imperial Russia
— Richard Stites

"Engrossing, erudite, and full of surprises, this study makes an essential addition to the growing literature on Asia and the west."—Jonathan Spence, author of The Chan's Great Continent
— Jonathan Spence

“This insightful and elegant study offers the first full survey of Russia’s Asian imagination in the imperial era. With a wonderful touch for texts and personalities, David Schimmelpenninck reveals how Russian views of 'the East' were at once similar and different from what we're used to thinking of as a European Orientalist norm. In fact, as he argues, there was no single unmoving framework for perceiving Asian cultures, neither in Russia nor in the West. Instead, what is truly distinctive about the Russian case – and what Schimmelpenninck helps us to see in a new and full light – is how important Asia became to the Russians’ understanding of themselves.  Anyone interested in the history of identity and culture in Russia will find much to take from this book.”—Willard Sunderland, author of Taming the Wild Field: Colonization and Empire on the Russian Steppe

"Written in an accessible style and drawing on literature in a host of
European languages, this book provides a most comprehensive and
up-to-date analysis of Russia's long and complicated engagement with
Asia and 'eastern' themes. Schimmelpenninck deftly explores numerous
dimensions of this engagement, including scholarly Orientology,
literature, art, music, material culture, and Orthodox mission. By
concentrating on the fascinating lives and careers of representative
scholars, artists, writers, and composers – Russians and non-Russians
alike – Schimmelpenninck invests his story with a compelling human
dimension. He situates Russia's Orientalism in broader European
patterns, but ultimately insists on the specificity – and profound
ambiguity – of Russia's engagement with Asia. In light of Russians'
inability to construe the East as an 'other' wholly distinct from
themselves, Russian Orientalism in this book represents a significant
departure from the Orientalism of Edward Said, which serves as
Schimmelpenninck's foil. I know of no other book that makes this case
so systematically, and it is certain to generate controversy and
debate."—Paul Werth, University of Nevada, Las Vegas
— Paul Werth

"Russian historical perceptions of Asia are a fascinating and important topic, both for what they say about Russian policy outside Europe and for what they tell us about the Russians themselves. As the balance of global power tilts towards Asia, where Russians position themselves between the West and the Orient is certain to become of ever-greater significance. No Western scholar is better equipped than Professor Schimmelpennick to write on this theme, and his new book is a tour-de-force."—Dominic Lieven, The London School of Economics and Political Science
— Dominic Lieven
or support indie stores by buying on
Copyright © 2020 American Booksellers Association