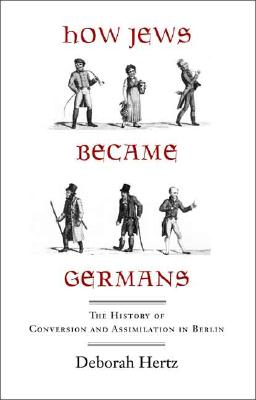 The History of Conversion and Assimilation in Berlin

When the Nazis came to power and created a racial state in the 1930s, an urgent priority was to identify Jews who had converted to Christianity over the preceding centuries. With the help of church officials, a vast system of conversion and intermarriage records was created in Berlin, the country's premier Jewish city. Deborah Hertz's discovery of these records, the Judenkartei, was the first step on a long research journey that has led to this compelling book. Hertz begins the book in 1645, when the records begin, and traces generations of German Jewish families for the next two centuries.The book analyzes the statistics and explores letters, diaries, and other materials to understand in a far more nuanced way than ever before why Jews did or did not convert to Protestantism. Focusing on the stories of individual Jews in Berlin, particularly the charismatic salon woman Rahel Levin Varnhagen and her husband, Karl, a writer and diplomat, Hertz humanizes the stories, sets them in the context of Berlin's evolving society, and connects them to the broad sweep of European history.

Deborah Hertz is Herman Wouk Chair in Modern Jewish Studies, University of California at San Diego, and the author of Jewish High Society in Old Regime Berlin. She lives in La Jolla, CA.

Praise For How Jews Became Germans: The History of Conversion and Assimilation in Berlin…

"A book rich in humorous and touching vignettes, How Jews Became Germans gives human form to the themes of its history."—Christopher Clark, St. Catharine''s College, Cambridge

“Deborah Hertz''s brilliant and sensitive account of Jewish conversion to Christianity in Berlin from the end of the seventeenth through the middle of the nineteenth century is proof that solid quantitative history (counting numbers) can be joined with subtle biographic narratives (telling stories). Her work provides a richer and much more satisfying account of the complexities of Jewish identity in Germany during the age of reform and emancipation than we have had to date. The irony is that the quantitative work had been done by the Nazis to uncover the hidden descendents of Jewish converts. This becomes part of Hertz''s strongly autobiographical framing of her own project. This is the exemplary work on German-Jewish relationships for our time and a formative book for the writing of a new narrative history.”— Sander L. Gilman, author of Jewish Self-Hatred

“A pioneering effort to explore a controversial subject commonly treated in all-too easy terms of ‘loyalty’ and ‘betrayal.’ Important."—Amos Elon, author of The Pity of It All: A Portrait of the German-Jewish Epoch, 1743-1933

“In this elegantly written book, Deborah Hertz resists the temptation to judge or condemn those Jews who converted to Christianity between 1645 and 1833. Instead, she uses judicious scholarship to illuminate the social and personal contexts that induced some Jews to flee the antagonisms and constraints they faced as Jews and to achieve the ambitions they desired in Christian society. In so doing, she sheds light not only on the converts, but on the larger German society that required this dramatic step renunciation in return for an ‘entrance ticket to European Civilization.’”—Marion Kaplan, New York University

"The social and cultural history of Jews in 20th-century Germany is currently one of the hottest areas of academic inquiry and Deborah Hertz is one of its stars. This is confirmed by the lively clarity of her account of conversion and assimiliation in Berlin, How Jews Became Germans."—The Jewish Chronicle

"In this very readable book, Hertz continues her probing into Jewish-Christian relationships, particularly in the 18th and early 19th centuries. She describes how Jews at that time might have converted to Christianity for reasons of romance or career, and she tracks the many fascinating twists and turns to this story. For example, Lutheran pietists trained some of their members in Yiddish and rabbinic traditions in order to disrupt synagogue services and engage rabbis in debates for the purpose of Christianizing their congregations. Jews who did convert-famously, siblings Felix and Fanny Mendelssohn-were looked upon unfavorably by their fellow Jews and were never truly accepted in Christian circles either. Berlin is the focal point for this narrative, and Hertz''s sketching of this grimy, backward city in the aforementioned centuries is not pleasant. Although the account winds down in the 1830s, 20th-century happenings—namely, the Holocaust—undergird much of the book. . . . Highly recommended for all libraries."—Library Journal


"There is no book more exciting to read than one by an author who believes he or she was born to write it. In such books every line becomes a paragraph, every paragraph a chapter, and the book itself a never-ending story. Deborah Hertz''s How Jews Became Germans is such a book. . . . Her deep and sympathetic scrutiny of this unique emotional and controversial transition in the lives of her subjects illumines the human realities in new and moving ways."—Steven Ozment, The Weekly Standard