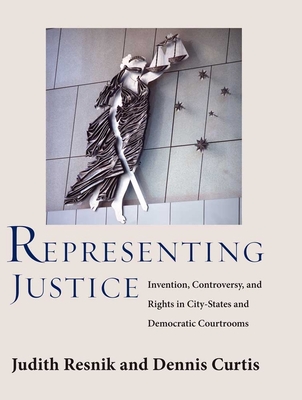 By mapping the remarkable run of the icon of Justice, a woman with scales and sword, and by tracing the development of public spaces dedicated to justice—courthouses—the authors explore the evolution of adjudication into its modern form as well as the intimate relationship between the courts and democracy. The authors analyze how Renaissance “rites” of judgment turned into democratic “rights,” requiring governments to respect judicial independence, provide open and public hearings, and accord access and dignity to “every person.” With over 220 images, readers can see both the longevity of aspirations for justice and the transformation of courts, as well as understand that, while venerable, courts are also vulnerable institutions that should not be taken for granted.

“This is an undertaking of major proportions. It is visionary in its aspirations and impressive in its achievements... It is fascinating, entertaining, and a joy to own… it would be my desert island reading.”—John Brigham, Law & Society Review

“Representing Justice is a treasure to read and to own.”—Emanuel Margolis, Connecticut Bar Journal

"Both Yale Press and authors Resnik and Curtis deserve the highest praise for this monumental undertaking. Highly recommended."—R.J. Steamer, Choice

“A more richly conceived catalogue of the development of specialized courthouses from multipurpose buildings and the art that adorns adjudicative space is hard to imagine.”—Michigan Law Review

Winner of the 2011 PROSE Award for Excellence in the Social Sciences, as given by the Association of American Publishers

Winner of the 2011 PROSE Award for Law and Legal Studies, as given by the Association of American Publishers


Selected as a Choice Outstanding Academic Title for 2011 in the U.S. Politics category.


Winner of the 2012 Scribes Book Award, as given by Scribes, The American Society of Legal Writers

The 2014 Coif Book Award given by the National Order of the Coif.

"Representing Justice is a fascinating and ambitious study of the iconography of justice and what it reveals about attitudes towards a just society, impartiality and authority, from the Renaissance to the Mexican Muralists. In this engaging and eminently readable book, the authors show how emblems, icons and courthouses vividly embody the fundamentally democratic process of adjudication."—Ruth Weisberg, Roski School of Fine Arts, University of Southern California

"How did a blindfolded lady holding scales became the ubiquitous image of justice? How have designs and decorations of spaces defined and redefined adjudication? Assembling monumental research, Resnik and Curtis powerfully show how images and buildings reflect and shape local and international justice across human history and how privatized dispute resolution, security concerns, and diminishing community participation erode the ideal and reality of courts' justice."—Martha Minow, Dean and Jeremiah Smith, Jr. Professor, Harvard Law School

"In this visually stunning and provocative book, Judith Resnik and Dennis Curtis lead us to think in new ways about justice as symbol, justice as reality, and the connections as well as the distance between the two."—Linda Greenhouse, Joseph Goldstein Lecturer in Law, Yale Law School

"This is a profoundly original and rich book. By looking at the public iconography of justice the book maps the evolution of courts and their relationship with public power and democracy as it has never been done. In this instance, an image is indeed worth a thousand words. Judith Resnik and Dennis Curtis offer us the images and articulate the words."—Miguel Poiares Maduro, Professor and Director of the Global Governance Programme European, University Institute Villa La Pagliaiuola

“This book is a richly documented study of the iconography of Justice, from Antiquity through its medieval personification as a Cardinal Virtue to the emergence of her figure as an independent icon of a social value.  Tracing the continuing resonance of that figure to the modern court room and in the public imagination, Representing Justice demonstrates the power of an image to embody ideals and, when those ideals are ignored, to stand as an indictment of injustice.”—David Rosand, Meyer Schapiro Professor of Art History Emeritus, Columbia University

Judith Resnik and Dennis Curtis are law professors at Yale Law School.
Loading...
or
Not Currently Available for Direct Purchase