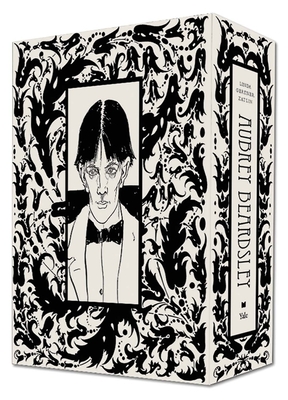 A comprehensive presentation of the provocative, modernist graphic works of Britain’s creator of Art Nouveau

This is the first book to bring together the recorded works of the English artist Aubrey Beardsley. Despite his early death from tuberculosis in 1898, at the age of 25, these amount to nearly 1100 completed works of art (plus many related sketches) as well as more than 100 sketches in his letters and the books he owned, and this book includes over 50 that have never previously been published.

In his brief career Beardsley made a defining contribution to Art Nouveau in Britain and abroad. He also influenced the early history of modern art, attracting the attention of the young Picasso, for example. His distinctive and innovatory graphic style, combined with highly provocative, often sexual subject matter, outraged critics and led to a period of intense notoriety. Beardsley's drawings span the grotesque, the delicately beautiful, the subtly erotic, and the frankly bawdy, and challenged the moral norms of Victorian society. They enthralled artists and art lovers the world over and continue to enthral today.
Linda Gertner Zatlin's text presents Beardsley's drawings with a full record of their making, provenance, exhibition history and references in the art historical literature. This material record is accompanied by often extensive discussions of their themes, motifs and symbolism, as well as their critical reception. Unprecedented in its scope and thoroughness, this study presents Beardsley's work and explores its meanings more comprehensively than any previous work on him; it is likely to remain definitive. This superbly illustrated two volume catalogue, beautifully presented as a boxed set, is both an essential reference for specialists and an accessible and enchanting delight for Beardsley enthusiasts.

Published for the Paul Mellon Centre for Studies in British Art

“This monumental two-volume catalogue raisonne is a notable coping stone on the edifice of his reputation. It reals that he is worthy of his enduring fame. During his brief lifetime Beardsley produced an extraordinary – there are over 1,100 drawings here. They have been brilliantly marshalled and laid out in a prodigious labour of dedicated scholarship by Linda Zatlin.”—Matthew Sturgis, Literary Review
— Matthew Sturgis

“This is a sumptuous publication of superb quality.”—Donald Mead, Intentions ( Journal of the Oscar Wilde Society),
— Donald Mead

“Faith in the strong black line is everywhere evident in a gorgeous new two-volume catalogue raisonné of Beardsley’s work, edited by Linda Gertner Zatlin, who also provides helpful commentary for each drawing. . . . [Beardsley] found, and left for us, a line that could hold.”—Morgan Meis, New Yorker
— Morgan Meis

‘Linda Gertner Zatlin’s magnificent new catalogue lists well over 1,000 drawings, none without interest, most of them masterworks, some the defining images of their time. Poring with Zatlin over every sunflower and poppy, every nipple and tassel and cloven hoof, studying her digests of the large critical scrutiny these pictures have attracted over more than century, one seems to pass in entranced slow motion over a huge corpus of work produced at superhuman speed … absorbing and exhilarating.’ - Alan Hollinghurst, Apollo

“Linda Zatlin wears three decades of consistent scholarship on Beardsley lightly, and her entries are a consistent pleasure… For the price, the book is a marvellous and monumental achievement, and by far the best single account of Aubrey Beardsley’s particular genius.”—Richard Canning, TLS
— Richard Canning

“Finally, this leading Art Nouveau figure and contemporary of Oscar Wilde gets his due, in a scholarly set presenting well over a thousand finished works alongside assorted sketches and writings. The sheer amount of work Beardsley left behind when he died at 25 is stunning, but his artistic prescience is the real mind-blower."—John DeFore, Hollywood Reporter (“Best of 2016”)
— John DeFore

‘Zatlin has created a book that not only does justice to an artist too little known, but one that will stand as the perfect example of the way in which a catalogue raisonné can, and should be, done. This is both a superb reference book and a living example of art historical/literary scholarship carried out on the highest level of creative excellence. Zatlin deserves awards for what she has single-handedly accomplished.’ - Gabriel P. Weisberg, Nineteenth-Century Art Worldwide
— Gabriel P. Weisberg