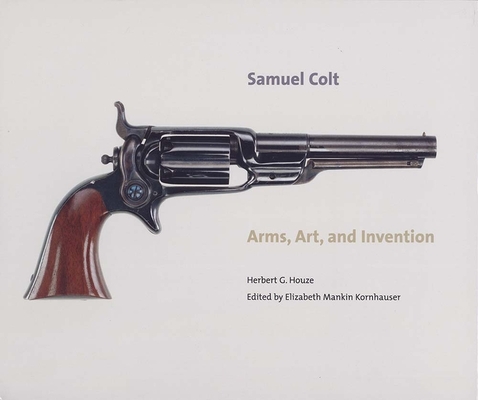 Samuel Colt (1814–1862) first patented his “Colt” revolver in 1835 and thereby redefined the architecture of handguns. This stunning book is the first to present in detail the evolution of his most famous invention and to document the unsurpassed Colt firearms collections held by the Wadsworth Atheneum.
Colt designed his revolvers with an artistic sensibility––paying particular attention to form and beauty and juxtaposing colors and finishes to heighten the visual effects. He was also one of the first American manufacturers to secure celebrity endorsements and to commission paintings by renowned artists like George Catlin to promote his arms. Colt’s standards for excellence, industrial foresight, and quest for market domination are explored in light of primary documents that reveal his constant battles to protect his patents.
Essays discuss Colt’s personal collection of historic firearms as well as the memorial collection of Colt-manufactured firearms, the relationship between art and commerce as they pertain to the inventor’s career, and his international celebrity. Richly illustrated and beautifully produced, this volume presents the artistry of the firearms that Colt worked so diligently to perfect––as well as his promotional abilities that made a tremendous impact on American culture.

Herbert G. Houze is an expert on Samuel Colt and firearms and has published extensively on the topic, including Colt Presentations from the Factory Ledgers 1856–1869. Elizabeth Mankin Kornhauser is Krieble Curator of American Painting and Sculpture at the Wadsworth Atheneum Museum of Art, and author of numerous books on American art. Carolyn C. Cooper, a historian of technology, is research affiliate in Yale University's Economics Department and author of Shaping America.
Loading...
or
Not Currently Available for Direct Purchase