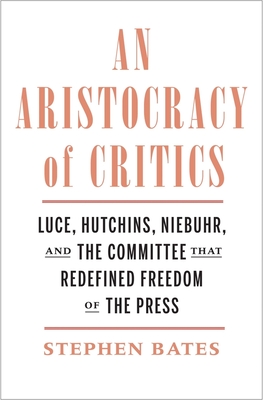 An Aristocracy of Critics

Luce, Hutchins, Niebuhr, and the Committee That Redefined Freedom of the Press

The story behind the 1940s Commission on Freedom of the Press—groundbreaking then, timelier than ever now

"Bates skillfully blends biography and intellectual history to provide a sense of how the clash of ideas and the clash of personalities intersected."—Scott Stossel, American Scholar

In 1943, Time Inc. editor-in-chief Henry R. Luce sponsored the greatest collaboration of intellectuals in the twentieth century. He and University of Chicago president Robert Maynard Hutchins summoned the theologian Reinhold Niebuhr, the Pulitzer-winning poet Archibald MacLeish, and ten other preeminent thinkers to join the Commission on Freedom of the Press. They spent three years wrestling with subjects that are as pertinent as ever: partisan media and distorted news, activists who silence rather than rebut their opponents, conspiracy theories spread by shadowy groups, and the survivability of American democracy in a post-truth age. The report that emerged, A Free and Responsible Press, is a classic, but many of the commission’s sharpest insights never made it into print. Journalist and First Amendment scholar Stephen Bates reveals how these towering intellects debated some of the most vital questions of their time—and reached conclusions urgently relevant today.

Praise For An Aristocracy of Critics: Luce, Hutchins, Niebuhr, and the Committee That Redefined Freedom of the Press…

"Bates skillfully blends biography and intellectual history to provide a sense of how the clash of ideas and the clash of personalities intersected."—Scott Stossel, American Scholar

“[A] masterful account. . . . Prodigiously researched and beautifully written, An Aristocracy of Critics is an authoritative and accessible study that situates the Committee on Freedom of the Press in the context of American intellectual history. It brings the commission to life, showing how their vision of the press developed into the shape that it finally took in their report. For this reason, it belongs in courses on media criticism, media ethics, and media history.”— John P. Ferré, American Journalism

“Scrupulously researched, An Aristocracy of Critics will stand as the definitive historical account of the Hutchins commission’s proceedings.”—Niall P. Stephens, International Journal of Communication

Winner of the 2021 Goldsmith Book Prize, Trade category, sponsored by the Shorenstein Center

“In decades of editing, I have always carried with me the thoughts of A Free and Responsible Press. Stephen Bates does us a service in his vivid account of its creation.”—Sir Harold Evans, author of Good Times, Bad Times and The Freedom of the Press

“A sterling piece of intellectual history of America at midcentury, and an important meditation on the problems of journalism in American life.”—Richard Tofel, president of ProPublica

“An Aristocracy of Critics is an elegant and seminal work about a gathering of mid-20th century intellectuals who presciently examined the role of news media in a democratic society.”—Sally Denton, author of The Profiteers: Bechtel and the Men Who Built the World

Stephen Bates is an associate professor in the Greenspun School of Journalism and Media Studies at the University of Nevada, Las Vegas.
Loading...
or
Not Currently Available for Direct Purchase