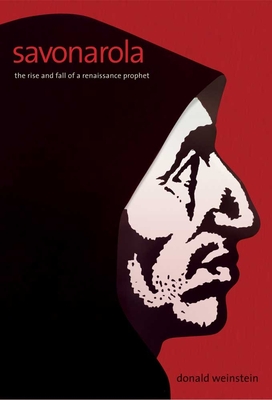 The Rise and Fall of a Renaissance Prophet

Girolamo Savonarola, the fifteenth-century doom-saying friar, embraced the revolution of the Florentine republic and prophesied that it would become the center of a New Age of Christian renewal and world domination. This new biography, the culmination of many decades of study, presents an original interpretation of Savonarola's prophetic career and a highly nuanced assessment of his vision and motivations.

Weinstein sorts out the multiple strands that connect Savonarola to his time and place, following him from his youthful rejection of a world he regarded as corrupt, to his engagement with that world to save it from itself, to his shattering confession—an admission that he had invented his prophesies and faked his visions. Was his confession sincere? A forgery circulated by his inquisitors? Or an attempt to escape bone-breaking torture? Weinstein offers a highly innovative analysis of the testimony to provide the first truly satisfying account of Savonarola and his fate as a failed prophet.

Donald Weinstein is professor emeritus, University of Arizona. He is the author of several books on Italian history and is a world authority on Savonarola and the Italian Renaissance. He lives in Sonoita, AZ.

Praise For Savonarola: The Rise and Fall of a Renaissance Prophet…

“A masterpiece of the genre. Donald Weinstein has succeeded in presenting a wholly coherent, finely balanced and deeply moving analysis of Savonarola, the man, the preacher, the reformer and the political leader. Weinstein's understanding and presentation of the complex political, social and religious contexts in which Savonarola operated are outstanding and unmatched by any other biographer.”—Lorenzo Polizzotto, The University of Western Australia

"Eminently readable, neither hagiographical nor overcritical, the biography, which will surely become the definitive account of this Renaissance prophet, leads us through the drama of Savonarola's life, allowing the man himself to emerge from generously-quoted sermons, letters and chronicles, as well as from the author's own deeply-researched and judicious narrative."—Alison Brown, author of The Return of Lucretius to Renaissance Florence
— Alison Brown

“Since his early research some forty years ago in the history of Renaissance Florence, Donald Weinstein has concentrated on that city’s religious life. His new biography of Girolamo Savonarola is a testimonial to his vast erudition, and to his penetrating insights into that complex world. Weinstein focuses on the Dominican friar’s role as a prophet, and his vision of Florence as the new Jerusalem. This dramatic account of the rise and fall of a major historical figure is an important contribution to the history of Florence during one of its most traumatic phases.”—Gene Brucker, Professor Emeritus, University of California Berkeley
— Gene Brucker

“…this new biography represents the definitive English-language account of its subject. It offers the kind of exhaustive yet balanced assessment of the controversial friar’s life that can only be produced by an expert writing at the culmination of his academic career.”—Jerry Brotton, Literary Review
— Jerry Brotton

“Weinstein presents a reasoned and fair view of his subject as friar, preacher, prophet and politician.”—Grahame Lock, The Tablet
— Grahame Lock

“Weinstein’s scrupulously researched finely balanced life is both a complex portrait of a fascinating figure and of a uniquely and creative time.” –Michael Kerrigan, The Scotsman
— Michael Kerrigan

“This impeccable book is the culmination of Donald Weinstein’s lifelong study of the Italian Renaissance and is a must-read for anyone interested in Savonarola. With customary learning, insight and lucid prose, Weinstein provides an exceptionally vivid portrait of one of the most controversial and fascinating figures of early modern Italy.”—Stefano Dall’Aglio, University of Leeds

“Excellent . . . a nuanced and engaging study of a man too often caricatured . . . [a] fine piece of scholarship.”—Ryan Sayre Patrico, First Things
— First Things

“Elegantly written . . . remarkable . . . Weinstein understands both the man and prophet like no other . . . an impeccable account." —Alessio Assonitis, Sixteenth Century Journal
— Alessio Assonitis

"David Weinstein's elegantly written Savonarola is a perfect culmination—and, at the same time, continuum—to this wave....With remarkable skill, he constructs a historical narrative gracefully punctuated by the more poignant passages from Savonarola's sermons and treatises, a vast territory, which he has charted like few others...[P]resents an impeccable account of Savonarola as a prophet and political leader, and merits a prominent place in the library of every dedicated scholar of Renaissance Italy."—Alessio Assonitis, Sixteenth Century Journal
— Alessio Assonitis